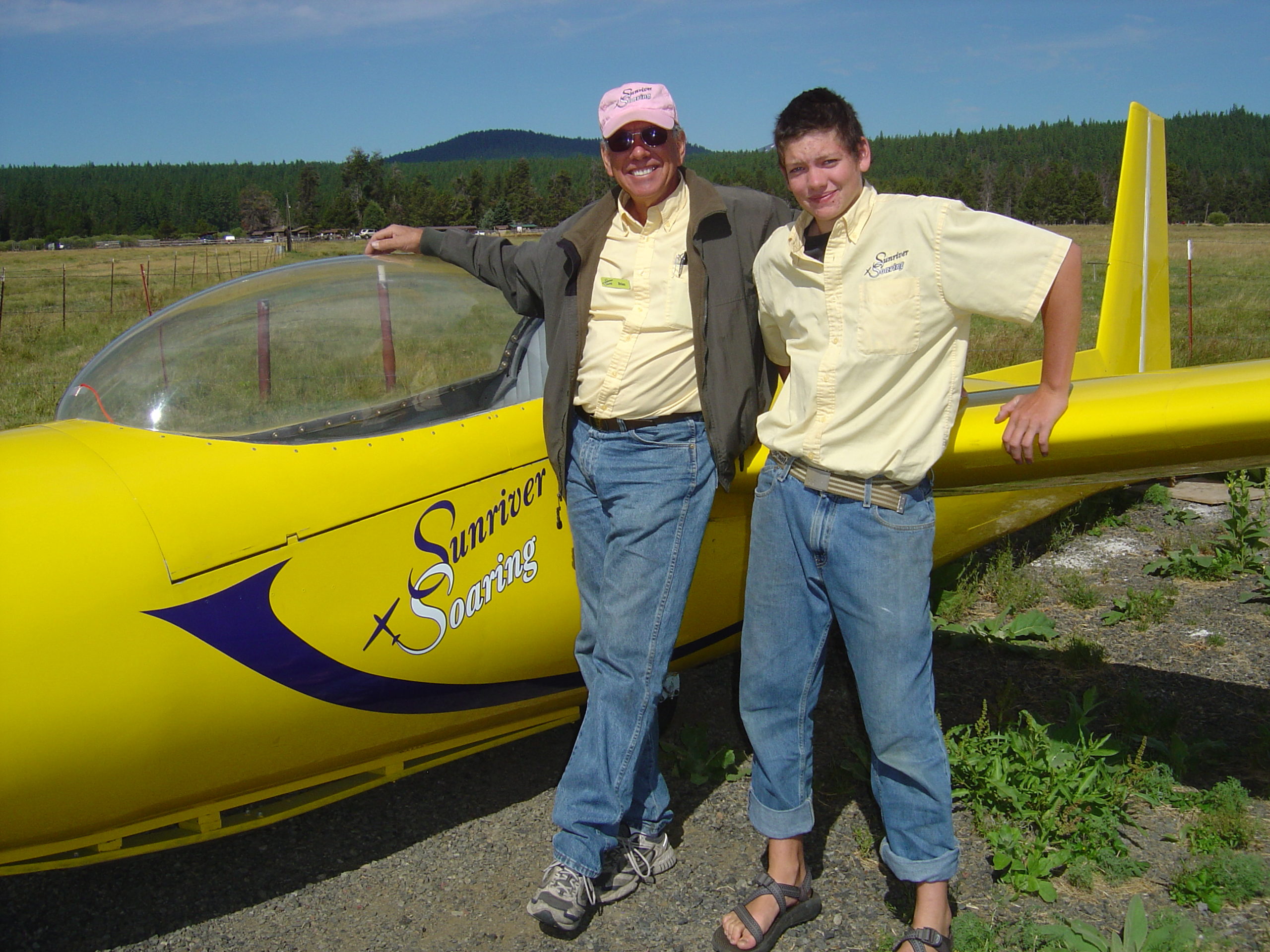 THe first day I ever got my son, Hooper, to put on a uniform shirt and work for me. No luck with shoes, however. 2008

A few hours of stick time in a glider can give you a deeper knowledge of the environment in which you fly—knowledge that many airplane pilots lack.

My glider experience came in handy one summer day when I took off in a rented Citabria from the Medford, Oregon airport and turned south toward the airplane’s base in Northern California.

Ashland passed beneath me, and soon I was over the state line. Ahead and off to the left was Mt. Shasta, just over fourteen thousand feet high. Flying to the west of Shasta, I thought I might be facing downdrafts that could make the ground come up uncomfortably fast, so I wanted some extra altitude just in case. I raised the nose and gave the engine full power, but the altimeter and vertical velocity indicator gave me bad news. I was hardly climbing. The day had turned hot, and density altitude ensured that the airplane would not get me to the safe altitude I wanted.

I was not facing an emergency, just an inconvenience. If I couldn’t put enough space between myself and the rocks below, I could turn back north and climb in cooler air. Then I could turn south again and probably get past the Shasta area. Or, if I really had to, I could land back at Medford, call the airplane’s owner, and tell him it would be another day before I returned the airplane.

I knew he would agree that this action was far better than making an unscheduled stop against some granite.

Until now, the air had been smooth. Then I hit a bit of turbulence, and the airplane bounced up. A second later, the air was smooth again.

Because of my time in gliders, that little bump was a familiar friend. I had flown through a thermal. With the throttle still all the way forward, I circled back and felt the bump again, but this time it lifted my left wing. Again, a familiar experience. I was on the edge of the thermal, so I steepened the bank to put myself in the middle of the rising column of warm air. Now I was circling in the thermal, nose up and full throttle. The Citabria climbed like a rocket.

After circling to the altitude I wanted, I pointed my nose to the south and abandoned the thermal. The terrain flattened out, and I was over the Central Valley of California. Every now and then I went through some bumpy air. The seat of my pants gave me a familiar message—thermals again—but I no longer had to take advantage of them. I landed at the Citabria’s base, and handed the key to the owner.

When this happened, I was a low-time private pilot, competent in good weather and uncrowded airspace. My use of the thermal was not a feat of extraordinary airmanship. It was simply the result of knowing how to gain altitude in a glider.

The good news is that you don’t need to go for a full glider rating. A few hours in a fixed-wing aircraft that has no engine will really help you. It will sharpen your stick-and-rudder skills. Your landings will improve, since a go-around is always impossible. It will deepen your knowledge of the complex and constantly moving ocean of air that directly affects you and your airplane.

You will be a much better pilot.

#81 The Beginning of the End