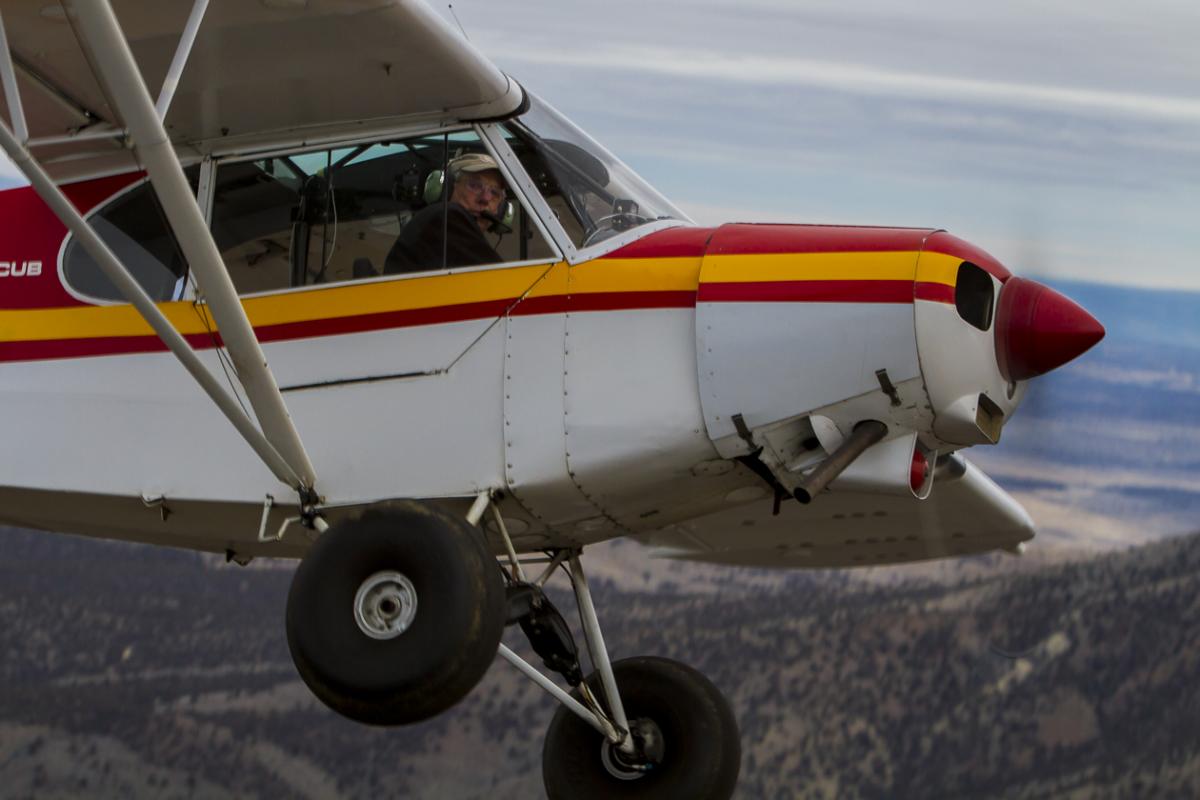 I’ve noticed that there is a logical connection between skill at three specific maneuvers.  More and more, I teach these three and I teach them in a specific order.  If a pilot comes close to mastery of the three, he will be able to make consistently accurate landings in the event of an engine failure.  He will also become more proficient at accurately swooping for a landing.

The minimum altitude loss 360.  How much altitude will you lose in a 360 degree power off turn?  What airspeed and bank angle should you use to lose the least amount of altitude in this turn?  You must know this, so this is the first maneuver in the series which we will perform.  We’ll find that we lose the least amount of altitude if we use a steep bank and an airspeed that corresponds to Minimum Sink.  That speed is lower than the usual “best glide” speed that everyone is taught to fly.  We will also see that coordination is of critical importance as we operate the aircraft at a steep angle of bank and relatively high “G” loading in order to regulate the speed.  If you skid this turn, our carefully planned lesson in steep turns will immediately change to spin training.  If you allow the nose to lower after entering the turn, you will lose altitude that you can never get back.  You must drag the nose across the horizon at roughly the pitch attitude it was when you began the turn.

The Circling Approach.  Now that we know how much altitude we will lose in a properly executed steep, power off turn, we can begin to practice the circling approach.  Not to be confused by the instrument approach of the same name, this is a series of circles over the runway.  It’s been taught as the “Overhead 360”, but since we learn to do several circles, there are more than 360 degrees of turn involved.  We might commence this approach several thousand feet over the point of intended touchdown.  We’ll simply circle down and make our landing out of the last turn.  The most important part of this approach will be the pilot’s judgment of how many turns he has left.  That decision will be largely dependent on his knowledge of how much altitude he loses in that last turn.  See, that first maneuver is becoming more important!  Just as many good flight instructors cover the airspeed indicator, I often place a hand over the altimeter during the practice of this approach.  I’m convinced that we need to develop our sense of altitude without dependence on an instrument. There will be more about that subject in a subsequent article.

The Landing in a Turn. The circling approach and the knowledge of how much altitude we lose in a turn has now prepared us to actually land in that turn.  In an emergency landing with little altitude and only the most suitable of several lousy places to land, it may very well be that a pilot will need to be able to execute a landing in a turn in order to make it.  We don’t always have the luxury of enough altitude to make a downwind, base and final leg at the altitude we’re accustomed to.

And speaking of choices, irrigation pivots, which dot the countryside, can be excellent choices for an emergency landing.  But as smooth and nice as these fields are, they all contain a potential trap for a stricken airplane.  These circular fields contain wheel tracks.  Some of these tracks are quite deep and the untrained pilot, who can only land in a straight line, will be forced to cross one.  If it’s a deep track it’ll catch his gear and turn his otherwise smooth landing into a disaster.  But the pilot who can land in a turn can simply made his approach around the outermost part of the circle.  He can then dismount from his un-damaged craft and take a bow. That’s right before the irate farmer arrives to assess the damage to his crop.  Always carry lots of cash.

The engine failure on takeoff is another time when the Landing in a Turn may well be the only option.  You can go ahead and obey the rule of always landing straight ahead in the boulder field if you want, but I’ll continue to teach my students to constantly analyze their options on every takeoff so that, if it’s at all possible, they’ll be ready to whip it around and land back on the airport.  It may be that they will only have enough altitude to land in a turn.  But when the dust clears, let’s compare two results of that engine failure after takeoff.  How did the “Acme-trained” guy do landing straight ahead in the boulder field as compared to the “Tailwheel Town-trained guy, who coasted to a stop on a taxiway or runway?

Because safety is the primary consideration in our selection of altitude in our landing pattern, we must be able to conduct a safe landing in the event of an engine failure at any time in that pattern.  That’s why we can fly such a lower downwind, which results in far more landings per hour and greater proficiency on the part of our graduates.  The average pilot can’t fly his downwind that low because he must have room to make a base and final.  At their lower altitude, our students must make a landing in a turn if they lose power.  It’s a maneuver that they are comfortable performing. Do ya hear those chickens flapping as they settle to their roosts?

The Landing in a Turn is the critical third “Amigo” in this troika of maneuvers that are taught at Tailwheel Town.

It’s fun for me to see a pilot’s skill and confidence increase dramatically when we practice these three operations.  I’ve discovered especially that the Landing in a Turn is a real piece o’ cake when the other maneuvers have been learned.

I’ve also found that my courses, either the Tailwheel Endorsement or Stick and Rudder Master Class, are constantly changing and evolving.  The practice of these three elements of a growing competence in accuracy approaches is becoming more of an important part of my curriculum.  And one thing is sure:  when you practice these maneuvers, you’ll get a chance to participate in our trademark activity… Happy Swooping!

#65 Who Needs a Glider Rating?