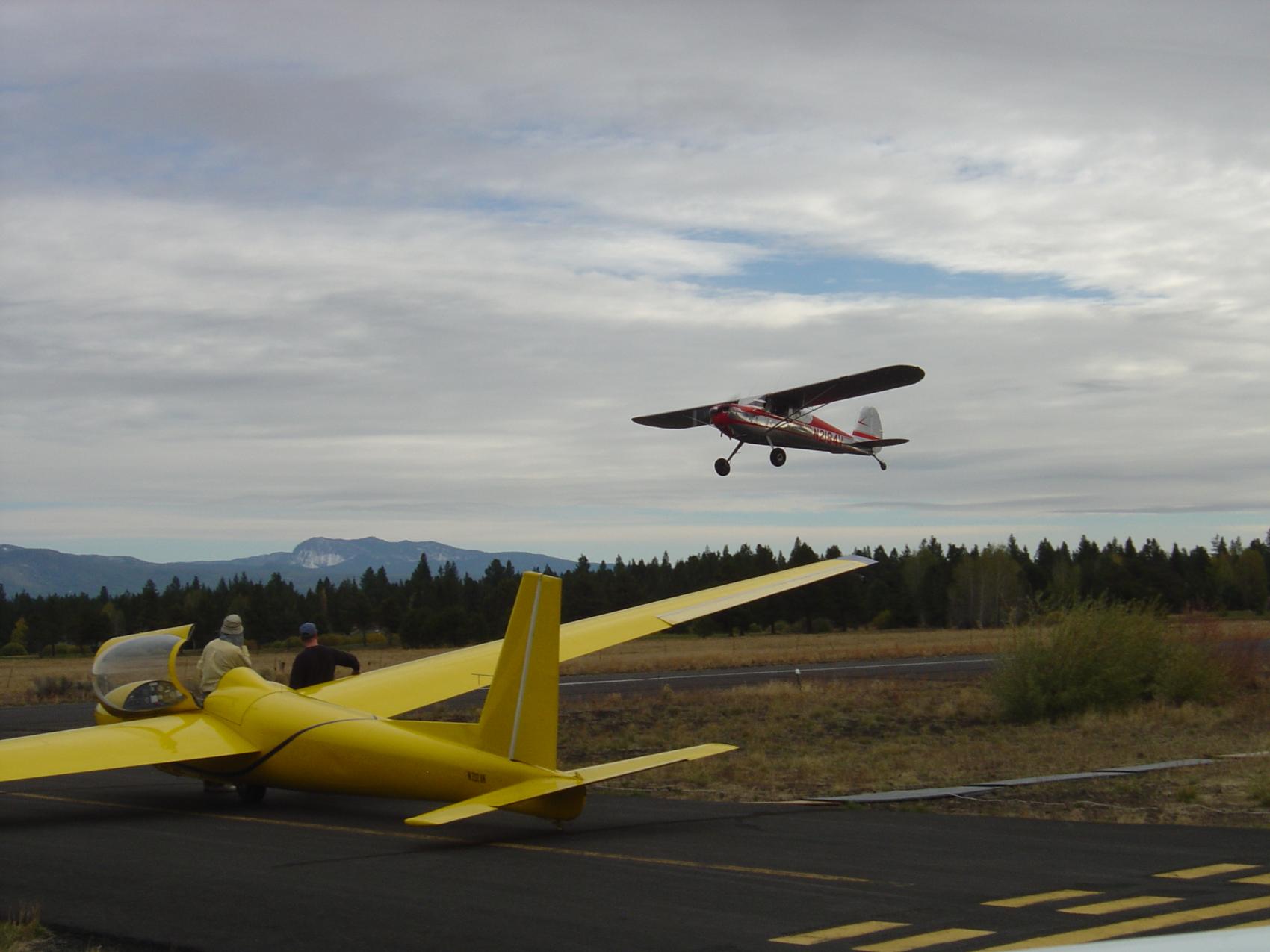 I’ll never forget the anticipation with which I watched Joe Ralkowski perform a snap roll on takeoff in his 450 Stearman out of a pasture at our ranch in southern Oregon. (https://tailwheelersjournal.com//2012/the-great-american-flying-circus/) It is with similar anticipation that I watch some of my tailwheel students perform a much more straightforward takeoff. 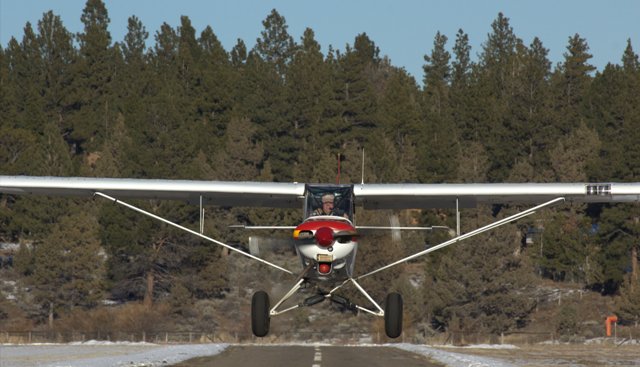 The takeoff in a tailwheel airplane deserves some scrutiny, resultant understanding and mastery.  Keeping it straight is a major issue for many tailwheel pilots, both new and experienced.  Why is it so difficult for many pilots to keep it straight on takeoff and why do they often tend to have more trouble after the airplane has accelerated to nearly flying speed?  They’ve worked on controlling the heading of the airplane as they taxi to the runway.  Then, as they apply power, they are making large rudder inputs to keep the heading constant.  That may be the problem:  As the airplane accelerates it requires less rudder deflection to accomplish the same amount of heading change or correction.  But many pilots continue to use large rudder inputs, causing the airplane’s heading to make larger changes and thus requiring more correction of their correction (see “Correcting the Correction”).  This situation just may be the one that I spend more time helping fix than any other related to tailwheel rudder work.

An airplane is at its most vulnerable when taking off.  The pilot’s choices in the event of engine failure or other mishap are far more limited than they are at altitude.  Heck, there IS no altitude which can be traded for distance or speed.  That’s why it is so important to THINK and to PLAN each takeoff so that you know your options.  All my students know that I’m really big on their constantly making decisions regarding where they will go and what they will do in the event of a problem at every point in a takeoff and departure (that’s why I just hate the Acme Flying School’s insistence on straight-ahead departures… no matter what) .  One of the most important things you can do to increase your chance of success is to use the runway as efficiently as possible.  I’ve elaborated on this subject in “Spending Distance”, but I’ll touch on it here. 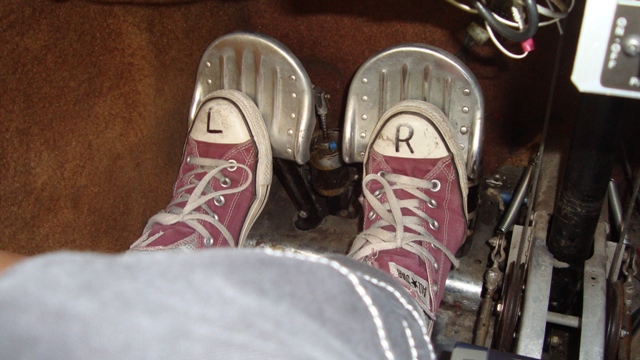 There’s an old wheeze that states that the useless things in flying are runway behind you, altitude above you and fuel in the fuel truck.  It’s an old wheeze because it’s true.  It is the simplest thing in the world to use every bit of the runway available to you, but many pilots waste runway by failing to start their takeoff from the VERY END.  Either that or they roll down the runway for yards and yards, fussing around before applying full power.  Unless you can make an intersection takeoff while retaining lots of options for places to go in the event of engine failure, DON’T DO IT.

ALWAYS taxi to the very end of the runway and bring your power up while turning around so that full power is applied by the time you are on runway heading.  There are other techniques for application of power on takeoff.  In my opinion they are all usually wrong.  Although there are times that holding the brakes and bringing the power up, then releasing the brakes may be appropriate, I don’t like the technique.  I’d rather take advantage of the airplane’s motion and have the throttle open by the time we’ve turned to takeoff heading.

All the flight schools teach both the short field and the soft field takeoff technique.  They should.  I’ve heard of some instructors having their students make EVERY takeoff a soft field takeoff.  There’s a lot of wisdom in that approach.  Rather than making that technique, which is so dependent on good elevator skills, a rarely practiced one, it builds much more skill at using the elevator to properly control the pitch and thus the altitude of the airplane.  And altitude on takeoff is hugely important, but not for the reason a lot of pilots think.  Most pilots do a poor job of accelerating in ground affect right after liftoff.  Instead, they climb.  They climb right out of ground affect.  I like to see a pilot get the airplane just clear of the runway and accelerating in ground affect so that it gains speed that can be traded for maneuverability in the event of engine failure. This is a tricky job for many pilots.  They sometimes allow the airplane to sink and touch the runway again after liftoff.  That’s why I usually charge a bottle of whiskey for every such touch.  I find it really helps to keep us in the air. Most of my students are pretty good, so my supply of expensive single malt is always a bit skimpy.

Every takeoff and every runway is different.  We can’t expect the same technique to be the best technique for all of them.  But generally speaking, speed gained in ground affect is not only cheap insurance in the event of engine failure, but it will also assist in clearing obstacles at the departure end because you’ll have some “zoom reserve”.

Most schools teach the obstructed departure technique of climbing out at VX (best angle of climb speed).  I’m a little different.  I teach that if you need to climb out at VX, you shouldn’t have landed there in the first place.  A climb out at VX is an accident waiting to happen.  In the event of a power failure you have very little time or distance in which to gain and maintain a speed at which you can flair in the landing that is about to happen.  Sure, know HOW to do it, but don’t DO IT.

Every serious “four-wheeler” driver knows that one of the primary rules of driving in the muck is “DON’T STOP”.  Airplanes are even more susceptible to getting stuck if you let them stop. Just the other day I watched a couple of yayhoos in the local Acme Flying School’s 172 roll to a stop in the dirt at our little airport and that took care of them.  They had to climb out of the airplane and push it to solid ground.  If they’d simply kept going, they would have been just fine.  Hell, I often land on the very dirt in which they became stuck.  Even on dry pavement, pilots will allow their airplanes to stop and then have to use high power settings to get them moving or turning again.  It drives me nuts.

As a newly minted flight instructor, I once landed a Cessna 152 (with a student aboard) in a field that was much softer than I thought it was.  With my heart in my throat, I taxied to the very end of the field, then slewed around while carrying damned near full throttle and lurched out of there in a nose high attitude.  If I had stopped, I’m convinced that we’d have ended up trucking that airplane out of there.  It was one of the stupidest things I’ve ever done with an airplane, but I sure learned a lot about soft field work from it.  I also learned that wheel pants suck in muddy fields and I gained valuable listening skills as my red ears were filled with a harangue on the phone from the property owner whose freshly harrowed field was marred with three deep ruts.

If a crosswind causes an airplane to go to the left of the centerline while its wheels are still on the ground, it’s up to the pilot to take it back to the centerline or to keep it there in the first place.  All too often I see a pilot use rudder alone to bring that airplane back.  If you use rudder alone, the airplane’s heading will now be off the runway heading.  So what happens when the airplane lifts off?  Because it’s heading is different, it will “scrub its tires as it lifts off.  You will also be slipping during takeoff, reducing your airplane’s climb efficiency.  This drives me nuts (more than normally).  For one thing, an airplane’s tires should never be scrubbed.  How do we prevent this scrubbing?  It’s easier than you might think:  Simply use aileron to “help” the rudder.  In the case above, we use right aileron.  Now the airplane is banked in the direction that it’s traveling at liftoff and there is no scrub.  For those who wonder why I teach so much one-wheel work, this is the answer (I get criticized for this by whuffo pilots all the time).  I’ve already pointed out that no airplane’s tires should ever be “scrubbed” and a proper one-wheel technique will have the airplane up on one wheel as it lifts off.  The tire will be oriented briefly to a tangent of the turn it’s describing.  The result is a quick little turn and no scrub.  The average flight school teaches this technique but never follows it through to practice that will make the pilot truly proficient.  That’s where maneuvers such as the Portuguese Roll, the Slalom and the Landing in a Turn come in.  These maneuvers build the pilot’s proficiency at properly controlling the airplane when it’s both flying and in contact with the ground.

Since prevention is always better than fixing, let’s look at that takeoff from the beginning.  As you sense that the airplane is being blown to the side, crank in that aileron.  Since you don’t have the airspeed necessary for that aileron to accomplish any roll, use it all.  As the airspeed and angle of attack reach that which will get the plane up on one wheel, don’t just sit there like a passenger; gradually decrease the aileron in order to maintain the bank that’s necessary to keep the plane on the centerline.  Can’t do it?  That’s because you never practiced one-wheel work.  That flapping sound you hear is the sound of ill-trained chickens coming home to roost.

The takeoff is the Rodney Dangerfield of flight training.  Give it the respect it deserves.   Plan for every eventuality and stay sharp by practicing precision.