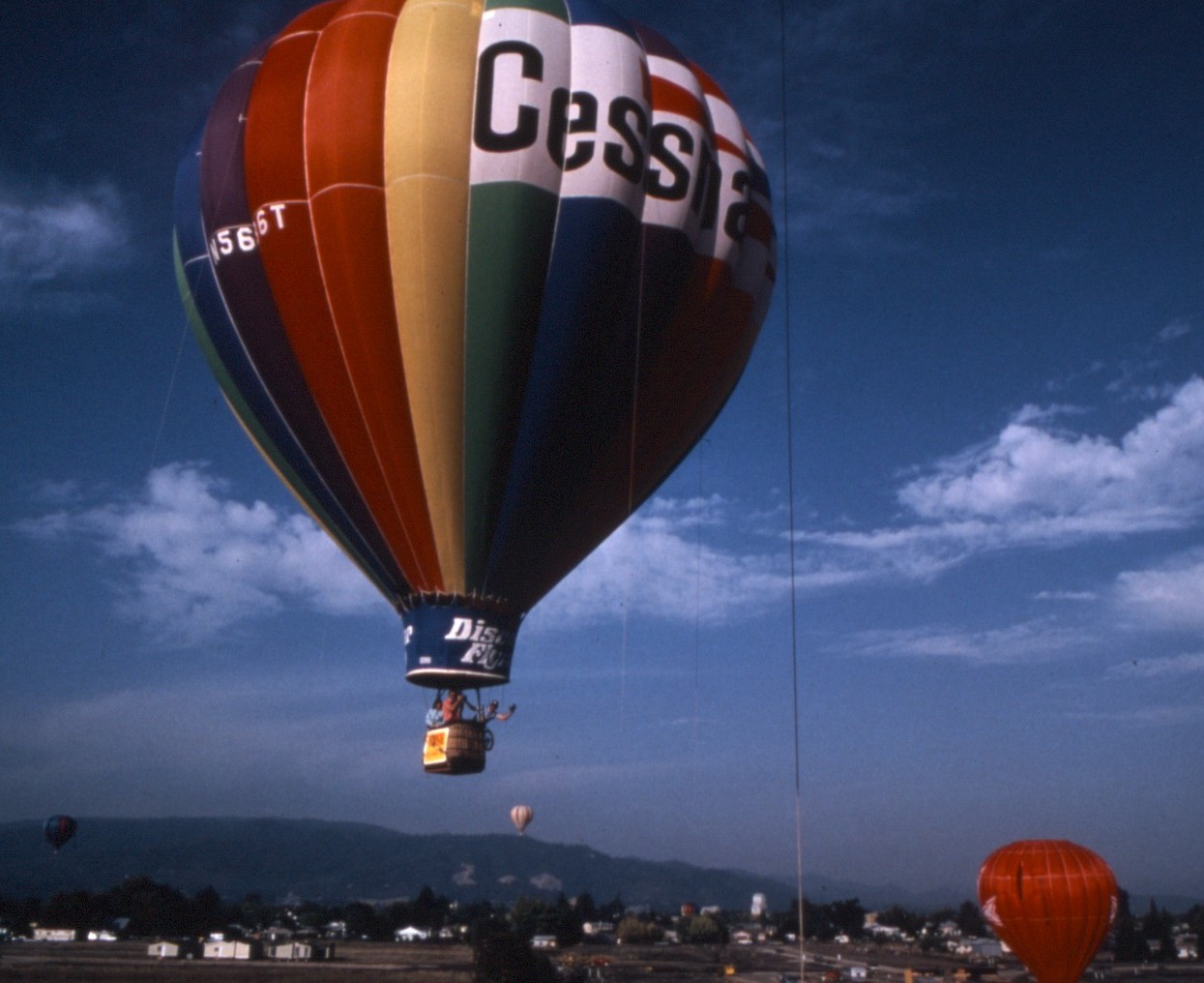 Those who don’t fly hot air balloons may not realize that there is no such thing as a Certificated Flight Instructor, Hot Air Balloon.  (CFI, LTA).  For some reason the FAA threw up its bureaucratic hands years ago and decided that any holder of a Commercial Pilot Certificate with a Balloon rating had the privilege of teaching.  And that’s how I managed to slither into my first job in aviation.  I gave “Champagne Flights” and taught ballooning in the Medford, Oregon area.  At that time, although a Commercial Pilot in Hot Air Balloons,  I was still working on my Private Pilot’s certificate in airplanes!

My role wasn’t taken too seriously. When the FBO for which I worked was sold,  the new manager waltzed in and said, “I want to have all Flight Instructors come into the meeting room”.  We all dutifully trooped toward the hall, but when the manager saw me moving toward the meeting room, he shook his head and said, “Not you, Lansburgh”.

It takes a crew to launch and recover a balloon and most balloonists depend on friends and other interested people to supply this necessary work force.  In my case, one of those who volunteered to help was a woman named Margaret, who at that time was working as a cocktail waitress at the airport bar where I spent far too much time.

Margaret would rise up early in the morning and help launch those flights.  She’d chase the balloon as I drifted with my passengers and students across the Rogue Valley and then she’d be there when we came back to earth.  She’d help pack up the balloon and get it back on its little trailer.  Margaret really loved balloon flight.  From time to time, I’d give her a chance to fly.  Here and there, bit by bit, Margaret accumulated flight time.  Within a season or two she was ready to solo.

I was finally working as a CFI in Montague, California.  Margaret and the crew had brought the balloon down from Medford and I’d told her that she could have a lesson in the great flying country of Siskiyou County, California.  What she didn’t realize was that it was my intention to solo her on this crisp, calm California morning.

The crew bustled around, getting the balloon laid out and ready for inflation.  Margaret assumed the duties of Pilot-in-Command and got the balloon inflated and ready for flight.  I distracted her to allow one of the other crewmembers to perform a very important task.  That person brought my sport parachute out of my car and hung it on the outside of the balloon basket.  Margaret had no idea that the rig was there as she and I launched out of that field and ascended into the sky above Montague.

“Let’s go up to 7,500 feet,” I suggested.  Margaret gave me a puzzled look.  She commented that it seemed rather high, but she blasted the burners and up we went.  We chatted about the envelope temperature and we observed the affect of the altitude on our drifting course as we ascended.  Once at altitude, I commented to her, “Y’know, Maggie, I think you’re ready to solo this thing.”

Margaret knew she was ready to solo, but she wasn’t too concerned about it right then.  After all, we were up at 7,500 feet and obviously it would be her NEXT flight that would be the solo.  She didn’t realize that “Cap’n McSneaky” had a trick up his nomex sleeve.

“Yup, I think it’s time,” I said as I reached over the side of the wicker basket and brought my parachute aboard.  It didn’t take more than about a millisecond for Margaret to realize what was going on.

“Yup, I’m going to leave you now.  I’d like you to set up a rate of descent so that when I exit, the sudden lightness of the basket won’t result in too much of a sudden climb.  That’s why we’ve gone so high.”

I explained to her that she simply needed to assume command and gradually begin to descend and find a suitable place to land… all by herself.

Margaret set up a rate of descent of about 700 feet per minute as I donned my parachute and adjusted it.  I wished her a great flight, climbed over the side of the basket and gently hopped off.

A skydive out of a balloon is unlike other jumps because there is no relative wind to support you as you exit.  When you jump out of an airplane, you are immediately supported by the relative wind and can control your body as it accelerates.  Jumping from a balloon you’re like a pussycat tossed from a balcony.  There’s nothing there and it’s a natural tendency to wave your arms and legs, searching for stability.

After about a thirty-second freefall I reached into the leg pocket of the “Top Secret” harness and flung out the pilot chute.  The “Strato Cloud” canopy deployed and I was swooping around over a country road.  I spotted the support crew down below, parked by the side of the road.  They were all waving and jumping up and down with excitement.  I circled in a descent over the road and landed in the field next to the little group.  I quickly gathered up my rig, hopped in the truck and we began the chase, following Margaret’s balloon as she slowly drifted into the foothills north of Montague.

Margaret landed in the Hornbrook City Dump.  It may seem to be a pretty ignominious place for a first solo landing, but to both Margaret and me, it was a beautiful place to end up and she had selected a fine spot that was ideal for her arrival back on earth.