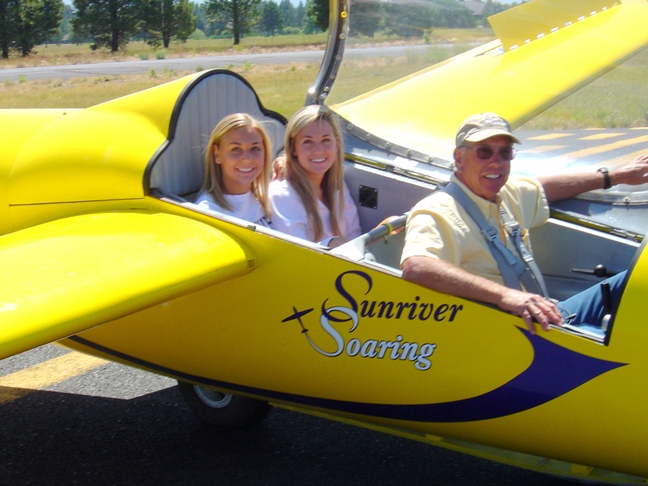 What is it that us flier-types have which seems to separate us from the rest of the yayhoos?  Do you suppose it’s the passion we feel for our air time?  It’s occurred to me that, because I feel that some of us should pursue our passions, we can fall victim to that old nemesis, familiarity, and the contempt that so often follows it around.  It’s certainly happened to me. It seems that whenever I’ve flown a job for a long period of time, I’ve experienced this phenomenon of getting a bit too used to this special work.  I remember one night over Tampa Bay Stadium.  I was flying an HK36 motor glider for L3 Wescam.  It carried a gyro-stabilized camera under one wing.  Ashley was the camera operator sitting next to me.  Her steady fingers kept the camera trained on the “Monday Night Football” game in the stadium below.  I circled endlessly, our video signal beaming to the ABC trailer parked next to the stadium.  Thousands of viewers thought they were looking at footage from “The Blimp”.  The blimp couldn’t make it.  We were filling in anonymously. The game went into overtime.  We were in the air that night for over four hours.  I remember having one of those moments.  I was tired of going around in circles and thinking about emergency procedures.  Tired of listening for the director’s instructions and having to keep the shot steady.  But then I had to give myself a figurative slap in the face.  I was flying and filming.  It was a dream job.  Sure, this was a rather lengthy sameness, but I loved this work.  Others would kill to do what I was doing.  Repetition

had made me complacent.  I snapped out of it. When I ran Sunriver Soaring, I was flying every day and it was a pretty special world of flying glider tours with a great crew and really appreciative passengers.  There were times, however, when I took it for granted.  There were plenty of passengers who would comment on what a special life I was living.  They helped keep me from taking it for granted. Most of us, however, don’t have a steady diet of the activities that drew us to the winged life. But then we have a day of flying which reminds us of how much we love this “winged life”. Yesterday was such a day.  I think it was the ideal day for a guy like me.  We needed to get some footage for three different stories on the Tailwheeler’s Journal.  One story was about “Multiple Landings”, that operation I teach, where the airplane is touched down, then lifted off for another subsequent landing.  As many as five or six of these can be done  with one pass down the runway.  It can be a tricky maneuver, mostly because I stress quality over quantity.  I always tell a student who is just learning the maneuver, “Just try to do two.  Let’s concentrate on doing these landings and takeoffs well.  Then we’ll work on increasing the number of them we can do on each pass.”   But today I wasn’t teaching.  Today I was doing.   Accordingly, I was working hard at getting about five cycles per pass and to make them as smooth and as good as I could.  As an added complication, I felt it might be a good idea not to crash into the camera car, which was racing alongside me down the runway. That last concern would be even more important while we shot “Slaloms”.  This maneuver was begun with a landing in a turn, then the airplane was flown in a serpentine pattern, back and forth across the centerline with first one wheel on the ground and then the other, the ship carving turns back and forth.  It’s probably a lot more difficult than the Multiple Landings, but I teach them both in my Master Class and, time permitting, in a tailwheel class as well.  When I arced to the right this day, I was looking Ol’ Bert Garrison right in the lens as he hung out of the speeding camera car right next to me.

Normally, I don’t usually fly these maneuvers.  Normally, I teach them with only an occasional demo to show a student how it’s done.  But this day there was no student.  Just Bert and our other camera operator, Ginger, on the ground or in the camera car being driven by Vern.  I’d zip around the patch doing the runs over and over while Bert advised me on the radio as to what he needed or how it looked in the camera.  I was a busy guy.  I had to think like a pilot, like a film maker and like a politician, making sure I didn’t piss anyone off while doing these maneuvers, which to whuffos look insane.  So professionalism was uppermost in my mind.  But you know something?  I had a ball.  I so rarely get to actually fly the airplane that this was a huge treat for me. So the next time you happen to see one of my videos which might feature the demonstration of a maneuver, you will know that you are watching a guy who, for a little slice of time, is having a wonderful time. And that, after all, is what brought me to this life.