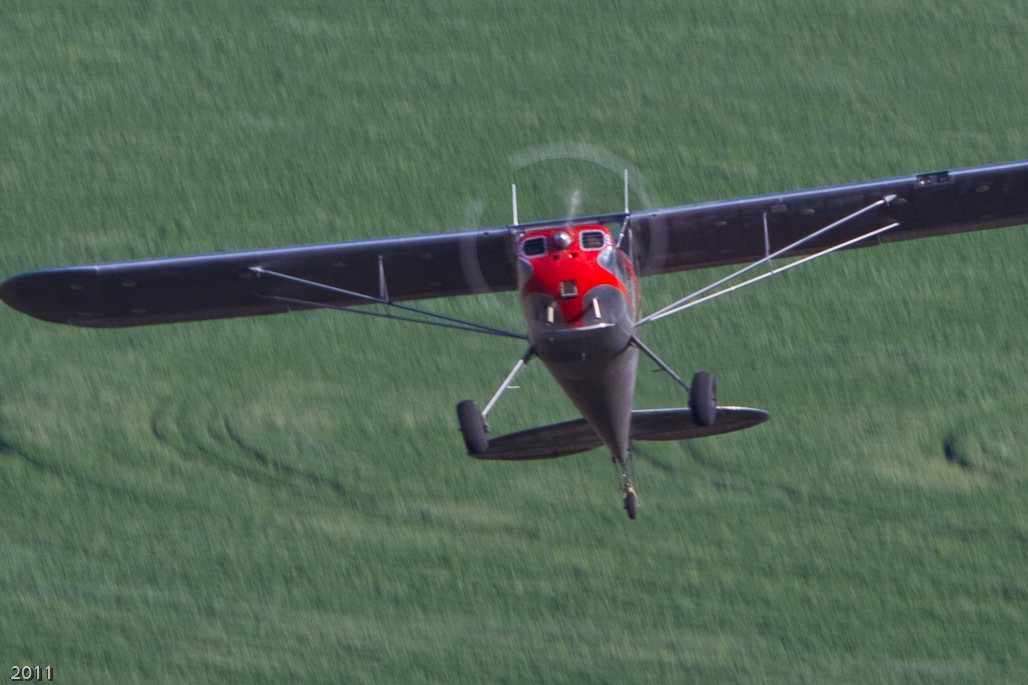 I’ve flown a lot of kids.  There’s one thing I’ve noticed about most of them.  Although most kids are afraid of real aerobatic maneuvers like loops and rolls, they are almost universally delighted by the simple sensation of zero “G”s.  You have a kid hold a wallet or a watch in the outstretched palm of their hand, then fly a parabola which subjects them to zero “G”s and, as that wallet or watch floats up out of their hand, they giggle in delight at both the sight of that object floating and the feeling of their own body becoming weightless

Sometimes it’s useful for us to revisit our childhood and remember simple delights.  I have a friend who learned to fly somewhat late in life, but took to it easily and has become a very competent flier.  Sometimes she likes to get together with me in order to “stretch herself with skill level improvement”.  Today we flew out to have some fun.  We circled John and Debbie’s irrigation pivot.  We flew at nap-of- the- earth, following the irrigation pivot’s wheel tracks and flying a precise, fun low-level circle with the precision which would be impossible in the standard, FAA approved “Turn about a point”.  As we passed the house, John waved at us from the deck, sharing our delight.

Maybe it was steep turns that made me think of the YoYo.  We’d discussed the roll of “G” force increasing stall speed as it keeps us at altitude during that 2“G” maneuver.

I set us up with a relatively low power setting.  I brought the nose gently up.  Then, directing her attention to the “G” meter, I smartly lowered the nose and caused the “G”meter to indicate ½ “G”.  Then I let the speed build up in the ensuing dive before smartly raising the nose to cause the “G” meter to indicate two and a half “G”s.  We scrunched into our seats under the pressure of the “G” force.  That’s all the demo she got.  A flier has to perform this maneuver herself in order to avoid wooziness.  Besides, I have a personal philosophy of providing only the necessary demonstrations… A student has to be the one in control most of the time; not the teacher. It worked.  As she changed the pitch of the little Cessna, I talked her through the YoYo.  She watched the Accelerometer and giggled as her butt raised out of the seat at ½ “G”.  Then she gritted her teeth a bit and pulled, watching the meter, feeling the “G”’s and pulling two and a half “G”’s.  She repeated the process.  After all, there’s a reason it’s called a “YoYo”.

I was thinking to myself how unfettered our emotions and sense of thrill are when we are kids.  It’s kind of a purity that we eventually discard.  Maybe we shouldn’t.  At least that’s what I thought when I lightened up and floated through half a “G”, listening to Jeannine.  She was gaining an understanding of “G” force which can be gained no other way, but of which most adult students are deprived when they learn to fly.  Jeannine was picking it up fast and she was giggling…  just like a kid.

“Tsk, tsk, tsk,”  Murray clucked as he read this article.

He knitted his brows as he expressed his alarm at the liability inherent in describing a maneuver like the Yo-Yo.  He felt I was advocating that everyone, regardless of skill level, go out and practice the maneuver.

“Murray”, I replied, “how about I tell everyone that my airplanes are always equipped with an accelerometer and that no one who is not experienced at aerobatics and applying “G” force should ever perform such a maneuver?”

Murray grudgingly allowed as how that would be okay.  You just read it.)