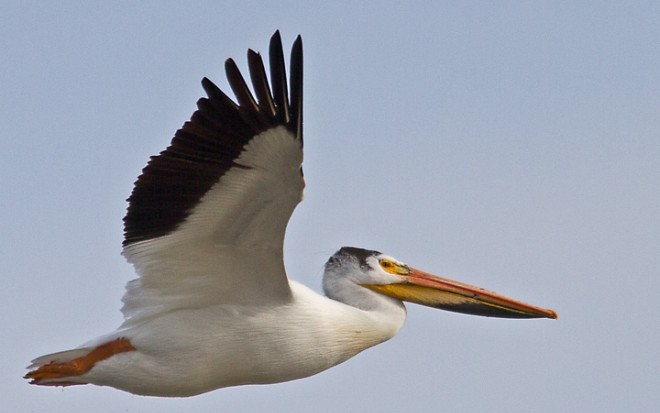 Hugh and Colly had a very nice Schweizer 2-33 sailplane.  Colly was learning to fly in it and she was taking lessons from Kat.  Kat is a terrific instructor and a fine glider pilot.  She is also a smartass, so on this day I was itching to give her some of her own medicine.

It was a rare flight.  Rare, because Kat and I rarely had a chance to fly formation with one another.  But today we were sharing a thermal.  I was flying the Big Yellow Glider, a 3-place Schweizer 2-32.  I had a passenger in the back.  Kat and Colly were flying in the two-place 2-33.  We were sharing a thermal and it  was a lot of fun to fly with the two.  Flown by a competent pilot, the 2-33 can out-climb the 2-32.  Kat was gradually outclimbing me in that thermal.  But then I spotted a flock of large birds off to the West.  I called Kat on the radio and distracted her.

“Hey, do you see that flock of birds over there?” I asked.  “I’ll bet you guys could fly over there and see what they are,” I suggested.  While she craned her peepers to see the small flock of large birds, I was slowly gaining on her.  That wasn’t going to last.

“You’ve got better penetration than I do.  Why don’t YOU go over there,” she answered.  Well, I wasn’t going to fool her into leaving that thermal, so I gave up.  She was right, anyway.  I peeled off and headed for the flock. 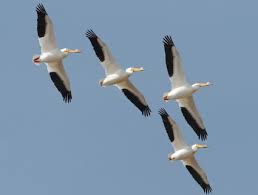 As I flew toward them, I porpoised.  When I flew into a little lift, I’d raise the nose, slowing the big ship and staying in the lift longer.  Then, when I exited a thermal, I’d lower my nose to beat feet and get out of the sink sooner.  Eventually I got to the flock.  They were big white pelicans.   They were alternating flapping with soaring and they were doing pretty well.  They couldn’t hear the big yellow glider gaining on them to the rear and gradually closing in on them.

Then one of the birds must have heard us.  He turned his head to look back at that huge, funny bird gaining on his flock.  Ever see the size of a pelican’s beak?  When that pelican turned his head, that big beak caught the relative wind and he snap-rolled out of control.  The others began to flap, but by then I’d overtaken them and I cruised through the flock and greeted the panicked birds.  “Hi, Guys!” I hollered, then pulled up and away to blast back toward that thermal in which Kat and Colly were riding upward.  It took me a while to get there and they’d gotten even higher while I’d been on “Pelican Patrol”.  I didn’t have a hope of catching them.  I left them to their lesson and my rider and I continued to hunt for another thermal and do a little sightseeing.

#150 The Mystery of Sisters