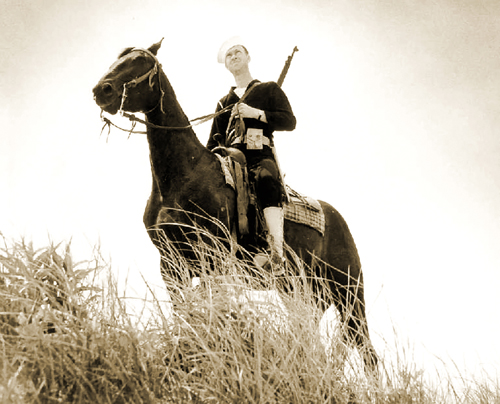 However, I always knew that I would probably serve in the military someday.  As a kid, I l 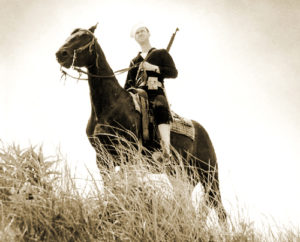 eafed through a copy of Life Magazine.  There, in resplendent black and white photography, was a picture I will never forget:  A United States Coast Guardsman was horseback.  His M1 rifle was slung on his back.  Another picture showed his faithful German Shepherd dog.  Together, the two were on patrol along the California beach.  There was no trace of bell-bottomed trousers.  His legs were clad in puttees.

“That’s the life for me!” I thought as I imagined myself mounted, armed, and in the company of that great dog.

ure stayed with me and when, years later, the draft loomed large and real, I remembered it and sought out the Coast Guard as the way to satisfy my military obligation.    I looked long and hard and found a recruiter with a relatively short waiting list in Eugene, Oregon.  I took the physical and waited for the call.  The draft board was breathing down my neck, but the Coast Guard came through, calling me up just in the nick of time to beat the draft.

Those who know me know that I can be terribly obtuse about some details.  One of those was the issue of uniforms.  The picture of the Coastie on horseback had lingered in my little pea-brain.  It wasn’t until I reported for basic training in Alameda, California that I realized the Coast Guard wore SAILOR SUITS!  But I hate sailor suits!  It didn’t make any difference.  Those moth-ball-smelling woolen sailor suits were issued to me and there I was, clothed in the hated cap and cape, complete with bell bottomed trousers.  There were no stables or kennels, either.

While in basic training it was discovered that I had a talent for rifle-flinging.  Into the Coast Guard’s drill team I went.  I was even held at the training center after graduation in order to march in their honor guard and teach recruits those rifle-flinging skills that I had mastered.

It was while in the Honor Guard that I discovered aviation.  We were sent to march in the Seafair parade in Seattle.  A grey bus transported us from Alameda to San Francisco International airport.  There, the Coast Guard maintained an Air Station.  Flashy-painted C-130 turboprops were stationed there and used for search and rescue as well as various logistical missions.  One of those missions was to transport the band and Honor Guard to Seattle for the Seafair.  Wearing my hated dress blues, I climbed aboard the C-130.  I settled into the troop seats in the large, dark hold as the transport took off and climbed toward Washington.  Once cruising, I unbelted and wandered back toward the rear “scanner” doors.  There, sitting in the scanner’s seat was an aircrewman.  A Coastguardsman like me, he was dressed differently.  He wore a green Nomex flight suit.  A jaunty suit, its utility gave it a far better look than my own dress blues.  I wore a “Donald Duck” hat, a bill-less white cap with “U.S. Coast Guard” on its ribbon.  He wore a ball cap.  “S.F.” was emblazoned on its front.  It was very cool.  The whole ensemble was perhaps made even cooler by the chewing gum on which the aircrewman chomped.

“Hmmm, this is an interesting looking life, this guy is leading”, I thought.

I figured I’d better find out a little more about this side of the Coast Guard.  Fighting the light turbulence, I lurched over to the guy.

“How do you like Coast Guard Aviation”, I inquired.

The young man looked at me casually and then, with a grin I would never forget, raised his thumb in the long-used aviator’s gesture of positivity.  “Chomp, chomp”.

We were dropped off at Seattle and represented the Coast Guard in the weekend’s festivities.

Back in Alameda, I went back to my routine until I could transfer to a school that would prepare me for a skill and a Petty Officer’s rank.  I hadn’t forgotten my introduction to aviation.  And flight suits.

I put in for a transfer and was sent to Jacksonville Florida to be trained as an aviation electrician’s mate.  Thanks to fellow Coastie Ray Wadsworth, I discovered flying at NAS JAX, joined the JAX Navy Flying Club and was soloed by CFI Dwight Thomas.  At the completion of six months I had a new “crow” on my arm and the designation as an “Aviation Electrician’s Mate, Third Class”. I was issued orders to Coast Guard Air Station, San Francisco.

I loved aviation.  I loved the mission of Search and Rescue.  Most of all, I loved that I rarely had to wear a sailor suit.

In the next few months, I checked out as a Search and Rescue Crewman in the oil- flinging and ancient HU16 Albatross, the C-130 four-engined turbo-prop and, my favorite, the HH-52A helicopter (it was the only one with a tailwheel).

One day I received an assignment to serve as a scanner in a C-130 whose mission was to fly to Seattle.  Its cargo:  The U.S. Coast Guard Band and Honor Guard, bound for the Seattle Seafair parade.

The recruits and Permanent Detail filed into the big airplane’s hold and found their spots on the row of red webbing troopseats.  We closed the hatches and trundled down the taxiway, reaching the runway and accelerating down it to climb into the air on our way to Seattle.

I kicked back in the Scanner’s seat and popped a fresh stick of Juicy Fruit into my mouth.  From the row of seats, a young recruit lurched toward me, a respectful smile on his face.

“So, how do you like Coast Guard Aviation?”, the young man asked.

I tipped my “San Francisco” ball cap back on my head and looked at the earnest young man.  I smiled at him.  The noise was too great to carry on a conversation.  I simply grinned and answered him with a big thumbs up.

I’ve been swooping ever since…