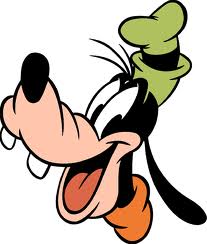 (or “Some teaching techniques work… some don’t”)

Decision making.  It’s what we all have to do on a regular basis.  Some are better at it than others.  I’m not very good.  But I know that.  So I have a little crutch that helps me out.

Everyone who is familiar with Basic Cartoon Devices  (the FAA would call them “BCD”s) knows about the “Conscience on the Shoulder” device.  A nod to the Christian commonality of our culture is in the usual characterization of two extreme voices of our conscience as an Angel and a Devil.  As an Animist, I don’t normally observe Christian traditions.  However, I love Christmas, most of the best curses have Christian roots and I’ve got to admit that I’m rather hooked on the Cartoon Concept of the Angel and Devil consciences.  That’s why I continue to have these dialogues with those two characters on MY shoulders.  Since I’ve always admired Goofy, my conscience characters are in the likeness of Goofy.  The one on the left is a hard-bitten

character with a three-day beard stubble and a really hardnosed attitude.  He can be counted on to counsel me to think of myself first and to give no one a break.  The Goofy on my right shoulder is considerably more angelic.  He’s a genuinely nice guy who always puts

the other person first and is kind and understanding.  When I have a knotty decision to make, I often consult with the two of   them.  They never agree, but after a debate that bounces around the three of us, I usually come up with a decision or a course of action.  It’s usually wrong.  But, as they say, that’s all I got!

From my very first day as a flight instructor, I have been consumed with inventing and trying out new teaching techniques.  These big ideas don’t always work.  Sometimes they snap back in my face.  One recent day I decided to try something new.  I was working with one of my favorite primary students and he was trying to perfect one of his favorite maneuvers:  The Landing in a Turn.  It’s a complicated maneuver.  You’re combining the wheel landing with a one wheeled, angled final and most people have a lot of difficulty learning how to combine the descent, the turn and the touchdown.  Jeff wasn’t listening to me when I said, “get the nose down”.  He wasn’t listening to me when I warned, “better get down… your turn’s going to be done and you won’t be ready for a touch down”.

“Well,” I figured, “if listening to the Goofys works for me, it’ll probably work for him.  I told Jeff that I was going to turn his training over to the Goofys.

Jeff did a good job of arriving at his Initial point.  Then he turned in on his 45-degree final approach.  Bad Goofy started in on him:  “Yer too damned high!  Whatsamatta witchoo…”.  Then Good Goofy jumped in to smooth things over:  “That’s okay.  Let’s just lose some altitude here as we clear the airport fence.  Put yer nose down! Gawrsh, that’s much better…”

Jeff crossed the airport fence and got his turn done with a pretty good landing in a turn.  Meanwhile, the Goofy’s were talking him through the operation in the unmistakable “Goofy style” .  As he straightened out and put the power to it, climbing out to re-enter the pattern, I asked him how he liked the instruction from the Goofy’s.

“Not bad,” he answered, “I could probably put up with them for another couple of tries before I go nuts and smack ‘em”.

So, like I said, some ideas work and some don’t.  I don’t think we’re going to unleash the Goofy’s on Jeff… or anyone else… anytime soon.  I’ll just keep them to myself.

I think we’re supposed to tell you that “Goofy” is trademarked by the Walt Disney Company (like you didn’t know that!)