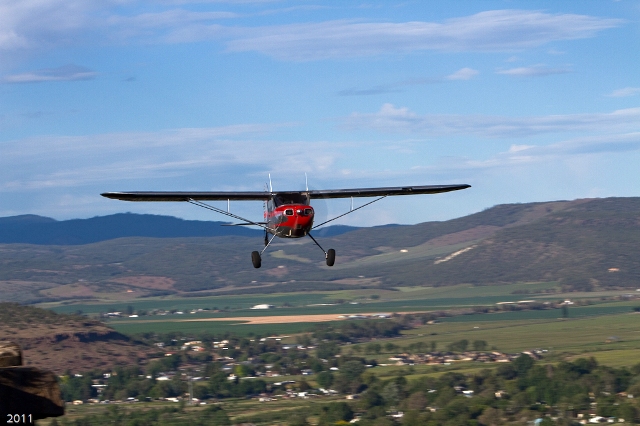 I was struck by a phrase used by my friend Jerry Groendyke.  He was referring to someone using a bit too much airspeed on a crosswind landing and floating a long way down the runway.  Jerry pointed out that this person was “spending distance”.  If this technique had been used on a short runway, it’s possible that all the distance available would be used up.

I got to thinking of the fact that there is only so much runway to be used and that there are many times that we need to be pretty smart about how we spend that distance.  All too often we waste runway.  The most common way we do this is on takeoff.  Many times I see a pilot taxi to the end of the runway, turn around, then allow the airplane to creep forward for quite a distance before fully opening the throttle and beginning the takeoff roll.  It may not seem like a big deal until you imagine the consequences of either an engine failure on takeoff or an aborted takeoff.  If you need to land straight ahead on what runway remains, you might be real thankful for the last twenty feet.  Where do you think that twenty feet came from?  It came from the twenty feet you didn’t leave behind you when you started your takeoff roll!  And as a tailwheel pilot, you SHOULD be able to stick your tailwheel right off the edge of the pavement at the approach end of the runway.

I once assisted with the recovery of a Beechjet which had landed long on a 5,000 foot runway and ran off the end.  The jet was mired in soft dirt about fifty feet from the end of the pavement.  Fifty feet.  Think about it:  If he had touched down at the same speed but fifty feet sooner, he would have gotten stopped before leaving the pavement.  Similarly, if a pilot loses an engine on takeoff, a relatively short distance could spell the difference between a safe landing and one which results in a mangled airplane and a dead or injured pilot.  So don’t squander that twenty feet at the approach end of the runway when you begin your takeoff roll.  Most instructors teach a technique of holding brake while spooling up the RPM, then releasing brakes for the takeoff roll.  I eschew that technique, preferring to roll onto the runway and bring up the power in a turn to runway heading.  I claim that my technique provides quicker acceleration without the risk of prop damage from FOD.  It’s not a big difference, just a difference in opinion and, of course, I’m right.

We can also spend distance laterally.  Many pilots, accustomed to big, wide runways, pretty much ignore the centerline.  They land on the left, the right, wander from one side to the other and pretty much use every bit of that width with very little precision.  I call it “aiming for the airport”.  They don’t think anything of that lack of precision until they are called upon to land on a narrow strip and realize that they’ve now got their hands full just staying on the runway.

We must have the skill to use the distance and width of the runway wisely and with precision.  That skill will not only prevent wasteful spending of distance, but it will also enable us to extend some landings in order to exit at a distant intersection without a long taxi.

When I was hopping rides in Steve and Susanne’s New Standard at Sun ‘n Fun, I watched a fascinating demonstration of incompetence.  The volunteer air traffic controllers at Sun ‘n Fun and Oshkosh have a well-designed technique for accommodating a huge number of arrivals.  They instruct pilots to land either normally or long (it’s my understanding that controllers are not permitted to ask pilots to make short approaches).  By staggering these two approaches they can handle a lot more traffic.  It’s almost like having two runways.  I watched hundreds of planes land and I was on the frequency so I could hear the controllers issuing their instructions.  An incredibly large percentage of pilots, when instructed to land long, could simply not do it.  Years of practicing landings to the numbers and lack of practice in accuracy landings or power-on long landings had rendered these pilots incapable of complying with this very simple request.  Their incompetence loused up this nicely-designed system and slowed the arrival of all these airplanes.  Just as we must not spend distance wastefully, we must also have the skill to use the distance with precision.

So think about all the ways you can save distance and use it wisely.  Such practice could pay off big time when you need it.

#195 One More Rant about the Radio

#240 Leading with Inside Rudder