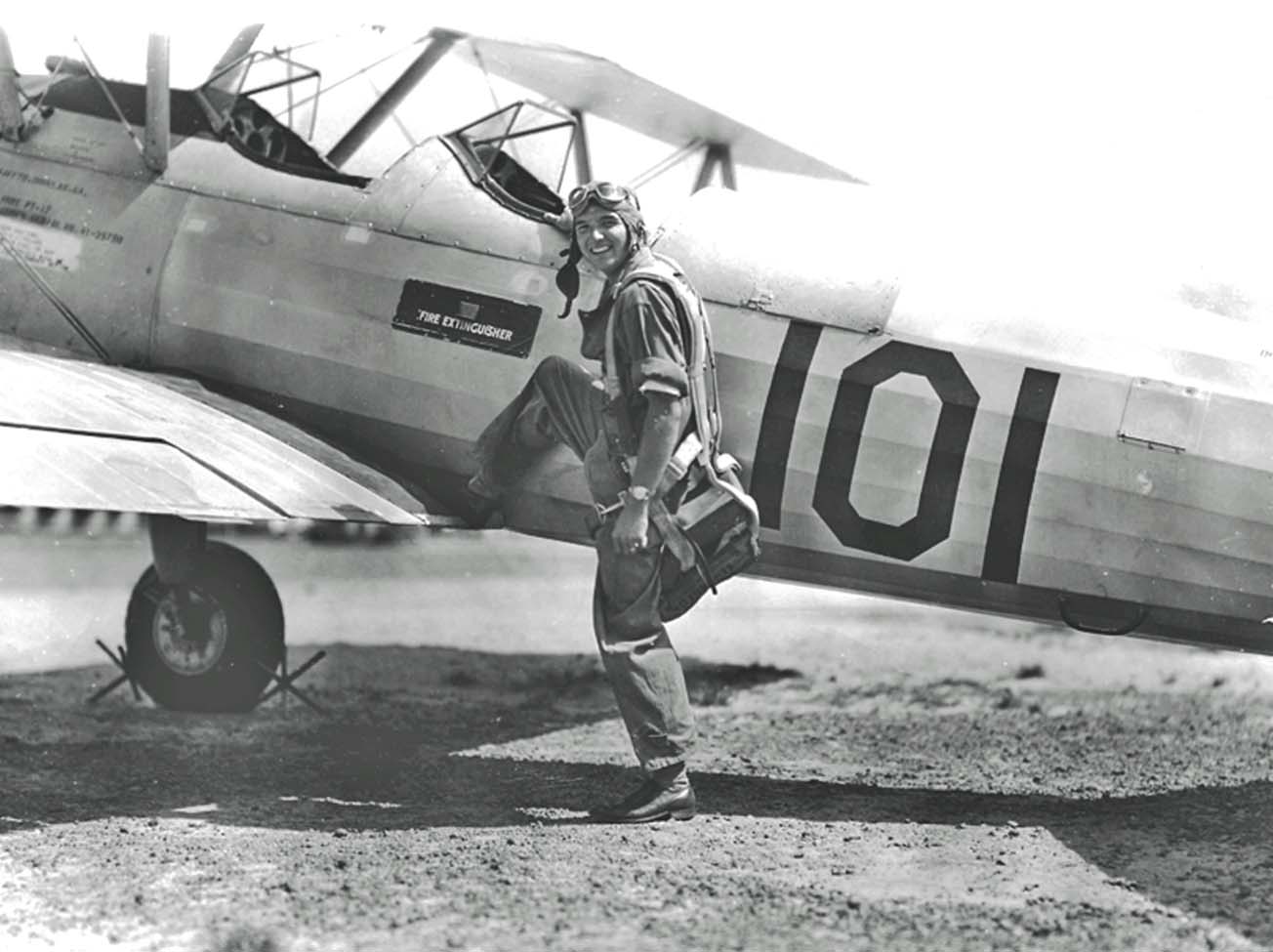 It was September, 2003 at a quiet little grass airport in Northern California.  I was cleaning the N3N’s engine after a 100 hour inspection when an elderly couple pulled up in front of the hangar. The lady was driving and she leaned back so that her husband could peer past her at the gleaming prop and shiny yellow paint of the old biplane.

The old man pointed a shaky finger at the airplane.

“I learned to fly in one of those”, he replied.

“Well, come on over and have a look at her if you want”.

He hesitated only a moment before he opened his door and, with no little effort, climbed out of the car. He was tall and lanky. He raised a feeble hand and brushed aside a lock of silver hair and adjusted his glasses. He ambled around the  car, stepping carefully as he went.   His eyes never left the airplane.  I caught myself and stifled the instinct to rush over and assist him as he left the support of the car.

His steps were shuffling at first. The closer he got, the better he walked. He laid a hand on the propeller hub.

He patted it gently and spoke to it quietly, “Hello old friend”, he said, then turned back to me and stated matter of factly, “It’s an R985 Pratt and Whitney”.

He straightened his back and walked around the airplane, caressing it with every step.

“I learned to fly in one of these,” he said again as a great smile stretched across his face. “I flew Wild Cats, and Corsairs, too.” He continued.  “Do you know what those are?”

He nodded, affirming that I should.

His wife had come to where I stood. She smiled affectionately at  her husband and I could see a little sadness in her eyes.   Perhaps she was wishing him one more day as the dashing young aviator that she had fallen in love with so many years ago.

“She flies great…” I replied, but was interrupted by a small voice in the back of my head.  “Well… I mean she flies pretty well.  We’ve been working on a few things and I was just getting ready to take her around the patch to check it out.”

The old man nodded again and I could see the desire to fly once more gleaming in his eyes as he marveled in the company of that old flying machine.

“Say… you being someone who knows these birds better than most… you wouldn’t want to come along and make sure we got her where she’s supposed to be would you?”

I thought his wife would faint right there on the spot. Her eyes got wide as saucers and she looked at me as if I had just told a dirty joke.

The old man’s head turned slowly toward me. “I… I don’t know…”

He looked at his wife for a moment, his eyes searching for a hint of approval. I caught the faintest of a nod and a little shrug of her shoulders. He patted the side of the airplane. “I might need a little help stepping up on the wing.”

“I’m C.W.”, he said. I took his offered hand and introduced myself in return.  Then I helped C.W. climb aboard. His arms were thin and felt fragile as I helped him up. He slid into the cockpit and I helped him with the buckles and straps. He stretched his legs out to the rudder pedals moving them back and forth feeling the mechanical resistance. Placing his hand on the stick he moved it side to side, fore and aft sweeping his gaze across the wings in front of him and eyeing the instrument panel.

He said not a word but brushed my hand away as I attempted to help him with the leather flying helmet and goggles. He finally got them situated over his bifocals and nodded.

We fired that old round engine up and let her warm up for a minute. I spoke to him over the intercom. He merely nodded and gestured in reply. I let him do the run up while I kept my feet on the brakes. He ran it up and checked both mags. Then he ran up it again just because.

We rolled down the runway and that old biplane leapt into the air. C.W. rested his arms on the cockpit combing.  He looked around and down at the ground passing beneath us, watching as the bonds of the earth fell away. We climbed skyward, up into the air far above where mortals tread. I tried a few turns on the way up, left and right, increasing the angle of bank only slightly with each movement.

“How’s it feel,” I asked, shouting into the intercom.

He gave a thumbs up and we leveled off at three thousand five hundred feet.

“You wanna take the stick?”

He paused only for a second, then tapped the top of his head in reply, indicating that he had the controls. He held her straight and level for a moment then rocked the wings gently, feeling out the controls. He turned left, then right, then turned both directions a hundred and eighty degrees. The ball stayed closer to the center every time.   He was looking around the sky and eyeing the space around us. Perhaps he was recalling those days when an adversary could be just off in the distance, waiting to pounce.

He flew for a while, turning and banking, giving some altitude here, but taking it back there.

The years flew away from him in those minutes aloft in an airplane that was young when he was. Though his years in this life were fading into the shadows, his skills as an aviator had never left him. His love of the sky had held him true in spirit even as the ravages of age played havoc with his body.

Finally, he held his hand up and pointed his thumb back at me. I could see his face in the mirror on the center section. He was tired but he was joyful.

He nodded and braced himself in the cockpit. I nosed the plane down to gain speed. The wind sang loud in the flying wires as we reached a hundred twenty miles an hour. I pulled back gently trying to stave off excessive G loading. We swooped high and over the top, both of us watching the ground below rotate around us. Easing a little forward pressure on the stick we started down the backside. The wind again picked up its flying wire song until we eased her back to straight and level, pointing our way back to the little tree lined airport.

We made a low pass over the grass runway and he waved a long arm at his wife waiting worriedly below.

The wheels kissed the grass as we flared to land and the old biplane rumbled along the ground to taxi back to the hangar.

When the propeller ticked to its final stop, there in that breathless moment of silence we sat, letting our senses take in the fact that we had flown high above and had returned safely if perhaps a bit reluctantly back to earth.

I helped C.W. climb out of the cockpit. He looked different than he did a half hour or so before. His eyes were brighter and his smile was that of a man who lived strong and healthy, a man whose life was in the sky.

His wife walked to the wingtip and watched him, worried yet proud. He walked to her as he swept the leather flying helmet and goggles from his head. He wrapped his arms around her and kissed her. Just like it was 1944 again.

Publisher’s note:  Tracy Thurman is a working ag pilot.  Many thanks to him for supplying this story.  Also thanks to my dear friend, Dick Dennis, whose picture as a student pilot graces these pages.