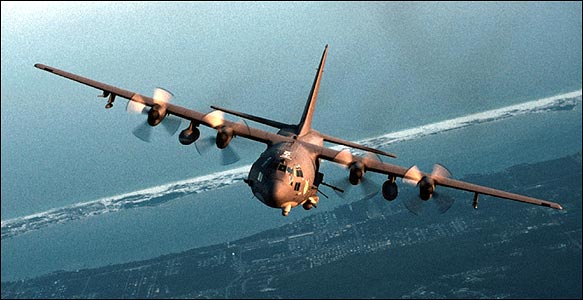 My pal Dick Dennis (he’s the cadet in the photo featured in “One Last Flight” recently sent me a wonderful video featuring a demo by an Air Force C130 pilot at the Paris Air Show.  It brought back a memory:

I was doing an airshow in California.  On the bill was a C-130 demo by the Air Force.  Now, I’m just a sucker for these demos, having been a C-130 crewman in the Coast Guard.  I’ve always thought of the aircraft as the modern day version of the DC3 and destined for the same reputation and standing when it is no longer in the arsenal.

The demo I witnessed was great.  I thought the pilot and his crew did a great job.  They topped it off by backing up the aircraft in front of the crowd.  I assume that the pilot depends on the scanner hanging out the ramp in the rear and letting him know on the ICS how he’s doing.  Either because of the Scanner’s inattention or the pilot’s goof, the Lockheed’s considerable prop wash hit a row of “Chalets” (glorified tents), and blew some of them over, showering the VIPs within in a cloud of dust and spilled champagne.  Oops! After the next act finished, the audience was witness to an un-scheduled event.  The pilot of the C-130 stepped up on the announcer’s stand and asked for the microphone.  He introduced himself to the audience and gave them a heartfelt apology for what had occurred.  He accepted full responsibility, offering absolutely no excuse for the incident.  I thought he was a class act. After the show several of us were gathered at the motel pool.  The Navy’s “Leapfrogs” were there.  They are a group of SEALS who do parachute demos at air shows.  Several other acts were present.  I looked up from my socializing at a chaise lounge poolside to see the C-130 pilot in conversation with a member of a prominent civilian aerobatic team.  The latter was chastising the pilot for his performance.  As I recall, he was even poking the man in the chest to emphasize his words.  The Air Force officer reached his limit at that moment.  He told the aerobatic pilot to back off.  Just then some other performers came to the same conclusion.  Several of the Navy Leapfrogs stepped up and let the aerobatic team pilot know that if he uttered one more word he would be launched into the pool, tailored flight suit and all.  He skulked off. My lasting impressions from these events were that I’d witnessed a refreshing example of interservice solidarity. And I saw the dark side of an individual who should have had more class.   I’d also witnessed a case of a person accepting responsibility without ever offering any excuses.  I will always remember his class act. Happy Swooping, Brian

#130 Frank Lloyd Wright and the Place for Opinion in Aviation