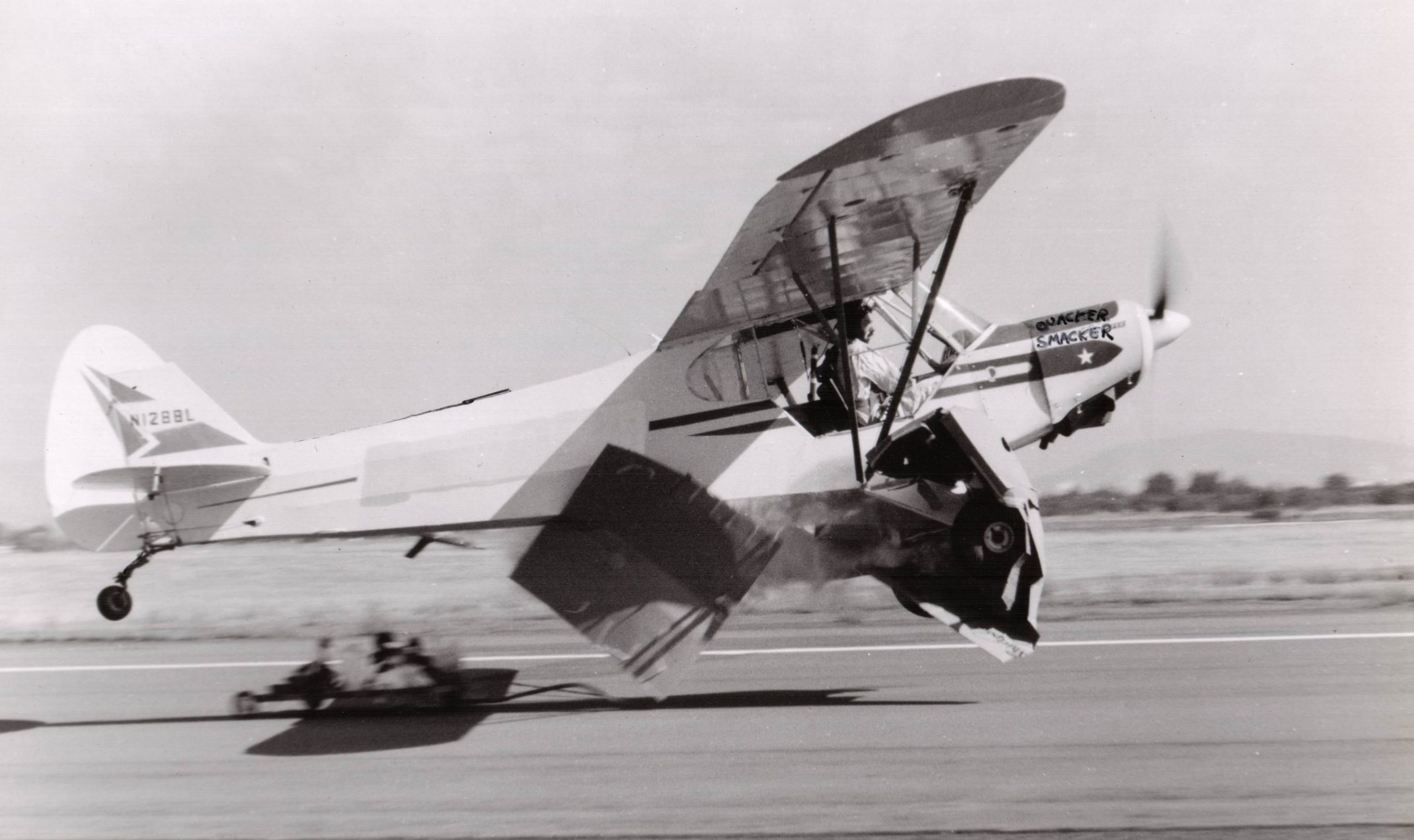 Back in 1987, I was making a living as an airshow performer.  I had a comedy act called “The Acme Duck and Airshow Company”.  It was the only animal act in the airshow business and featured me as the sad tramp clown, “Krashbern T. Throttlebottom”.  Also in the act was a talented Border Collie named “Ace, the Wonder Dog”, the Acme Ducks, and Nancy Lochrie, who played the part of the Duck Lady.

The show at Oxnard stood out among all the shows at which I performed for fourteen years.  I met a musician named Larry Cansler there.  Larry enjoyed some renown for having written the hit, “Wildfire” which was performed by Michael Martin Murphy.  Larry was enjoying a successful career as a conductor, composer and musician.  He was also an aviator and a very enjoyable character.  We went for a ride in my Cub and I introduced him to the thrills of waterskiing in an airplane.  We later collaborated on a video which featured his music combined with aerial footage that I shot while flying over Mount Shasta and Mount McLaughlin.   We’ve been friends ever since.

It was at the Oxnard show that I also met America’s first missile ace, a dashing F-4 pilot named Randy “Duke” Cunningham.  Ol’ Duke ran for Congress, got elected and was promptly convicted of accepting bribes from military contractors.  I think he’s still doing time in the “Big House”.

While doing a promotional flight before this show, I also experienced one of the most unpleasant run-ins that I’ve ever had with an air traffic controller.

Now don’t get me wrong.  For one thing one of my very dearest friends is an FAA Tower Chief as well as being a very skilled pilot.  Another very respected friend and associate is a retired FAA inspector.  So I don’t condemn all feds although I will admit to a certain prejudice.  I think that, with some notable exceptions, “them what knows, does.  Them what don’t know, teaches, and them what don’t know and can’t teach, govern.”  And before you think I haven’t thought of it, yes, I teach.  I never said I was a good teacher.  People keep asking so I keep teaching.

Here’s how I remember those events, through the haze of time:  I guess the thought of someone who can’t do what I do, presuming to tell me HOW to do what I do, kind of annoys me.   And this event occurred when I was an airshow pilot.  You see, airshow pilots tend to be a rather unique group of aviators.  Where most non-professional general aviation pilots are not very skilled, airshow pilots are at the top of their game.  They fly as all pilots wish they could.  Perhaps that’s why I was surprised at the reply I got when I called Oxnard Tower and told them that another performer and I were inbound for landing as a flight of two after our press photo flight.

“Formation landings are not allowed at Oxnard,” I was informed by a very matter-of-fact air traffic controller.

“Uh, we’re doing a photo flight and are planning to do a landing shot,” I told the guy in the tower cab.

“Not allowed”, he said.  I was reminded of an old picture I saw featuring Goofy.  The caption read, “Muh mind’s made up; don’t confuse me with the facts!”

Now, in spite of a very small number of peoples’ opinions (you know who you are), I really don’t have a short fuse or hair-trigger temper.  But this situation really angered me.  I was being told that I was not allowed to do something at which I was well-practiced by some yayhoo who probably wasn’t qualified to carry my or the other pilot’s flight bag.

“Fine,” I replied.  “Do you suppose you could clear me to land, then?”

“Piper one two eight bravo lima, you are cleared to land, runway two-five”, the yayhoo answered.

I made a short approach and landed in a turn on the right wheel.  Then I banked on to the left wheel, took the first turn-off in front of the tower and rolled up to it.  The engine’s impulse couplings were still ticking to a stop when I was out of the airplane.  I stalked up to the tower and yanked on the door knob, fully intending to take the steps of the inside staircase two at a time and confront the louse.  The door was locked.

There was a phone on the wall outside the door.  I picked it up and heard a buzz.  Then a voice at the other end said, “Oxnard Tower.”

“Open this door!” I demanded.

“We don’t have time for a tower visit right now”, he said.

I was furious.  I made some comment about his dubious genetic background and slammed the phone back in its cradle so hard that the entire unit was ripped out of the wall and hung impotently from its wires.

I stomped back to my Cub, propped it and hopped in.  I taxied back to the airshow pit area and got out where I was pitted.  The truck and trailer in which I hauled my plane, live ducks and two border collies was there and the Duck Lady was giving the ducks a bath.  I stormed over to the truck and fully expected her to share my anger at the dunce in the tower.  I related to her what had happened.  She looked at me for a second, clearly noting my baggy, patched  overalls, old time helmet and goggles, seat pack parachute and grease-painted face with sad mouth, red cheeks and drawn-on tears.  She considered the details I had just shared with her and dryly commented, “Do you have any idea how ridiculous you look?”

I guess the moral of my little story is that you should never hesitate to give some dumbass a piece of your mind…just don’t do it in greasepaint.