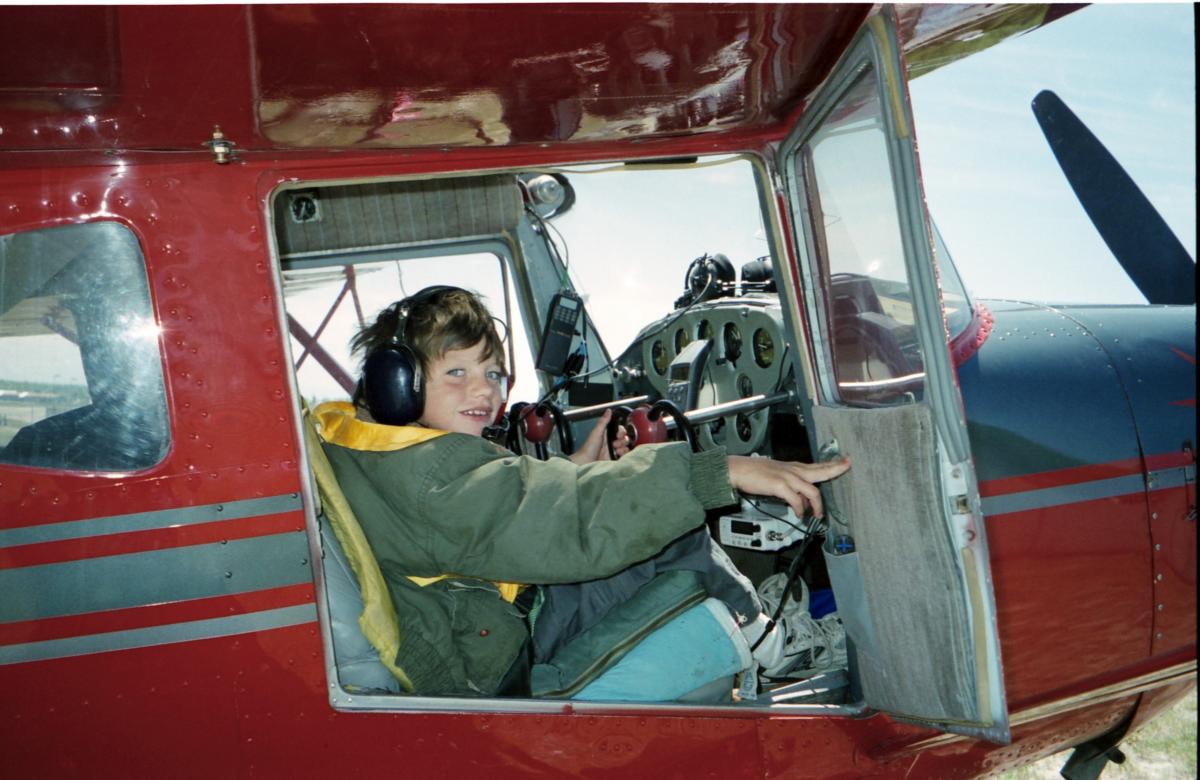 In my over thirty years of flying I’ve made a lot of trips.  Sometimes I think there isn’t a state or province I haven’t been in or over.  But there is one trip that stands out among all of them.  Perhaps it’s because that particular trip allowed me to see things through the eyes of a seven-year old boy.

In 2000 I had a little one-man maintenance and flight operation business in Fernandina Beach, Florida.  One day a guy showed up in a beat up old Cessna 140.  He’d been all over the place in it and had flown in from the Caribbean.  Into the fuselage were stuffed a couple of sleeping bags and even a surfboard.  He had electrical problems and it looked to me like he needed what amounted to a complete re-wiring of the plane.  He couldn’t stick around to take the plane when it was done.  He and I made a deal.  I’d do the job, then I’d deliver the airplane to him at Owls Head, Maine.  I had ulterior motives.  I thought it would be a good trip to take with my son, Hooper.  Seven-year-old Hooper was nuts for flying.  Back then he was convinced that he would become an astronaut and be the first man to walk on Mars.

I set about the wiring, finishing with Hooper crawling clear back into the tail cone to run the rear nav light wire.  It was the perfect job for a guy his size.

A few days later, Hooper and I hopped in the little Cessna and headed for Maine.  As we crossed the channel north of Amelia Island we could see a nuclear submarine coming home to its berth at the Kings Bay Nuclear Submarine Base.  Once over Cumberland Island, we dropped down to “nap of the earth” altitude and swooped along the pristine beach.  A little speck up ahead looked familiar to me.

Years before I had read an article in The New Yorker Magazine by John McPhee.  It was a great story of his travels with two biologists who lived off roadkill they found on the back roads of Georgia.

I never thought that I’d end up meeting the two.  They were Sam Candler and Carol Ruckdeschel.  When I moved from Oregon to Fernandina Beach, Florida, my travels took me across the St Marys River mouth to Cumberland Island and I met Carol.  Carol lived at the north end of Cumberland Island and every morning she would drive the entire length of the island.  Running down the beach on her four-wheeler, she would pick up critters who had washed up dead on the beach.  I knew that was Carol up ahead.  Running north-bound with the sound of the surf and the wind in her ears she would never hear that little Cessna swooping along behind her and closing fast.  Hooper and I chortled as we closed on the biologist.  We swooped right over her head.  As we pulled up we turned enough to see the four wheeler behind us and below, wobbling back and forth as the terrified driver recovered from the scare of being buzzed by that little Cessna.  Hooper and I were giggling as we pulled up. It was hard to tell which of us was seven years old.   We waggled our wings and continued on our trip.

The southern states coastline is beautiful and we followed the Intracoastal Waterway for miles.  Eventually, we flew along the North Carolina coast, descended over Nags Head and swooped into Kill Devil Hills.

We ended that day at First Flight airport in North Carolina.  As the name proudly proclaims, this is the site of the Wright Brothers’ first flight.  We found a nice tiedown spot where we pitched our little tent alongside the plane.  Then Hooper and I were off to explore.

I should have known what a treat this would be for the kid.  Hooper was nuts for aviation at that time.  He’d long declared that he would end up working for NASA. He loved to sit on the roof of our house on the Bells River and watch the space shuttle launches.   But as we prowled around the darkening site of the first flight and came to the dramatic Wright Brothers Memorial, that kid’s wheels were turning.  He was working on his life plan.  I later told friends that taking Hooper to Kitty Hawk was like taking a little Arab to Mecca.  He was captivated.  As he explored the site where they’d built their tracks and catapult to launch the aircraft, Hooper’s eyes got big and dreamy.  He stood where the Wright Brothers had stood and he launched a little paper glider where they had made their epic flights.

The lights were on, bathing the stone memorial in light as we prowled around the grounds.  We were the only people there and had the place to ourselves.   We scooped up a couple of quarts of sand from the dunes and squirreled them away in sandwich bags.  We made plans for that sand.  We’d build a little model Wright Flier and put it in a glass case with that sand in the bottom.  How cool would that be?

The following morning we went back to the Memorial and toured the little museum.  There was a gallery containing paintings of famous aviators.  Hooper spotted a portrait of his friend, Joe Kittinger, America’s first man in space.  I took a picture of him with the portrait and later sent it to Joe.

By now, Hooper had firmed up his plan:  He would join the Navy and become a fighter pilot.  Then he’d join NASA and become the first man to walk on Mars.  When he was too old to fly, he’d run the simulator for NASA.  Then he’d retire and build an apartment in the top of the Wright Brothers Memorial.  That’s where he’d finish his days.  Not a bad plan.  Hooper was pleased with it and happy to have some direction.

We took off from First Flight airport later that morning.  Our travels took us up the coast, across Chesapeake Bay and then into New Jersey.  Eventually we landed at Sussex.  It was just a little out of our way, but I wanted to show Hooper the cool little airport where I’d performed the comedy act a couple of times.

Airport Owner Paul Styger met us and we had a nice visit.  We had dinner at the old diner on the main drag, then settled in for the night, snoozing on the couches that are arranged underneath the elevated Fixed Base Operation in the open air.

The next morning it was off to Maine.  We flew over Kennebunkport and finished our day at the little airport at Biddeford.  We were met by Hooper’s Second Cousin twice removed in law, Anneliese Andrews, who put us up at her wonderful house at Prout’s Neck.  We prowled the beach and swam in the icy water.  Hooper and I washed off the salt water in Anneliese’s nice outdoor shower.

Since arriving in Maine, I had urged Hooper to enjoy some lobster.  I just love lobster.

“Have you ever eaten lobster,” I asked.

Anneliese and I enjoyed lobster at a couple of meals.  Hooper abstained.  We had a wonderful time for a day or two, then it was time to finish our duties.  We hopped in the plane and headed for Owl’s Head.  Hooper donned  his life jacket for the extended over-water part of our flight and the scenery as we flew along the rugged Maine coast was just spectacular.

We landed at Owl’s Head and were met by our customer’s wife, Kym.  After we made sure the airplane was secure, she would take us back to Prout’s Neck.  On the way we stopped at a little diner.  They had lobster rolls.  Naturally, I had to have one.  I made a last ditch offer to Hooper and he grudgingly agreed to order a lobster roll.

He loved it.  Hooper wolfed that lobster roll down and then it occurred to him that he had passed up all that lobster while he’d been in Maine.  I think the thought still bothers him.

The next day, Anneliese dropped us at the Portland, Maine airport and we caught a flight back to Florida.  I sat back in my seat and looked at the snoozing seven-year-old next to me.  It had been a great trip.  I hadn’t realized when I said, “sure, we can deliver the plane” that it would result in memories that I would treasure for the rest of my life.

Weeks later, I ran into Carol Ruckdeschel at a party on Cumberland Island.  I grinned at her.

“Did we scare the stuffin’s outta you?”, I asked.  “That was Hooper and me in that little red Cessna that buzzed you on the beach a couple of weeks ago.”

Carols eyes widened as she figured something out.  “Oh, that was YOU?  I wondered.  I heard about that”, she said.

“It wasn’t me.  It was the U.S. Park Service biologist… and she’s looking for YOU”.

Gulp!  Good thing we observed the first law of buzzing by keeping our “N” number unseen and not returning for a second pass!

Hooper has other interests now.  Although he soloed in a glider at sixteen and is one of the best natural fliers I’ve ever met, I doubt if aviation holds the same attraction that it once did.  That’s okay.  He does the things that he’s passionate about and I respect him for that.  Although twenty at this writing, he’s already been a river guide for over four years and he’s now living in the U.S. Virgin Islands for the winter before returning to Oregon for the rafting season.  He’s learning to spearfish, surf and sail.  He’s doing the things that a guy his age should do.

As I kick back in my office chair I glance at the shelves behind me.  There sit the two bags of sand from Kill Devil Hills.  Maybe Hoop and I will build that model Wright Flier and sit it in a glass case on that sand someday.  Maybe not.  It doesn’t matter.  The sand and the memories are enough.