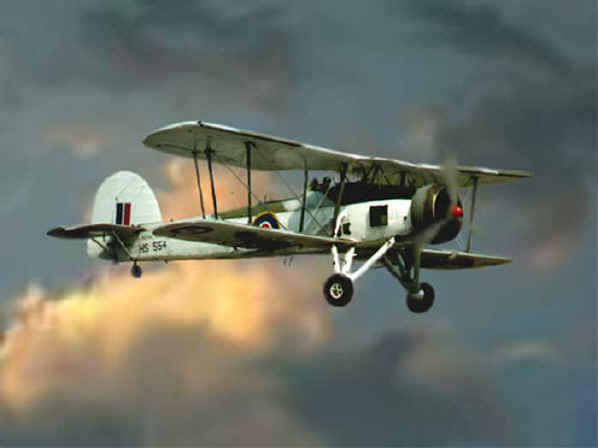 It was while doing an air show in Albuquerque many years ago that I wandered into a used book store and made my way to the aviation section.  I’m surprised that I picked up the book because its title certainly gave no hint as to its compelling story.  The book was “To War in a Stringbag” by Commander Charles Lamb and it immediately become one of the favorites of my library. 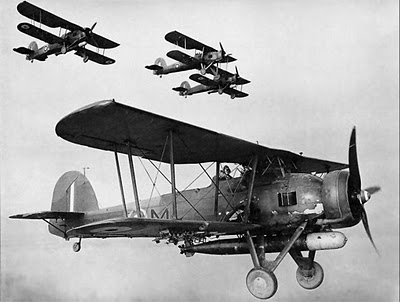 It’s the story of a British aviator’s wartime experience flying the Fairey Swordfish, a decrepit but oddly effective fighting aircraft.  The Swordfish was a biplane that would enter the second world war an obsolete aircraft but still be flying by war’s end.

In our video featuring retired Navy Admiral Mike Bowman, you saw Mike, telling me (between slow rolls in his British designed and Canadian built DeHavilland Chipmunk) that the British had pioneered virtually all the important developments in aircraft carrier design. “To War in a Stringbag” is a firsthand telling of British carrier aviation that testifies to the importance of some of those developments.

I think that one of the attractions of this book is the very British understated humour contained in it.  Lamb’s recollections of events is done in a very British, dry and sometimes hilarious manner.  Even the account of his capture and imprisonment as a Prisoner of War is an entertaining look at the strained relationships between combatants, with sometimes humorous anecdotes.

Lamb had a “Fitter” and a “Rigger”, who maintained his Swordfish.  The bond between the three men was important and was, perhaps, a little unorthodox because of the familiarity between the young officer and the two enlisted men.  Lamb had a flask of brandy which he took with him on missions.  There developed a routine:  On the way home, he would take a swig of the liquor, the amount consumed was dependent on the stress of the mission.  Upon landing, Rigger Brown would fish out the flask and take a big slurp of the brew.  Then Burns, the Fitter would finish off the flask.  In Commander Lambs words, “It became a daily routine, which would have shocked most naval officers, because if the flask was empty, Brown would say, in a in a voice of unqualified admiration, ‘you bastard, Sir’!”

At one point, Lamb is selected to be a “Guinea Pig” in order to test how short a fully loaded Swordfish can takeoff from the deck of a carrier.  After several test hops, the landing gear of the ship collapses from multiple carrier landings while fully loaded. An upset Fitter Burns observes, “Every time you touched down, Sir, your undercart was spreading apart like an old sow giving birth.  There isn’t an aircraft in the Fleet Air Arm that’s designed to deck-land with all that weight.  What did they want to go and pick on THIS aircraft for?”

Brown said to Burns, with a sly grin, “Well, they wanted to know how much deck the worst pilot in the ship would need with a full load!   It wouldn’t have been much of an experiment if they’d used a GOOD pilot!”

Even Lamb’s acknowledgements are sprinkled with humour. He thanks “Miss Susanna Lamb, my granddaughter, without whose help I would have finished in half the time”.

The book begins right before the beginning of the war and Lamb’s observations about some pre-war attitudes are particularly noteworthy, In discussing the disappearance of a fellow pilot, Lamb comments to the Squadron’s Commanding Officer, “Has it occurred to you, sir, that they might have been shot down?”

“Shot down!  Don’t be an ass!  We’re miles from anywhere out here.”

The tragedy had given me the opportunity of saying something that had been bothering me for a week.

“I know it’s a very remote possibility, but it isn’t impossible; and I think it’s time we armed the aircraft guns.”

“You’ve been watching too many films about the last war!” said (the C.O.) scathingly.  “What on earth do we want bullets in our guns for?”

“Because they are more useful with them than without, “I replied, equally scathingly, and was rebuked for being impertinent.

Lamb’s Swordfish was the last aircraft to be recovered on HMS Courageous.  He hops out of his aircraft and makes his way to the mess hall, looking forward to a drink with his pals.  He never makes it.  The carrier is sunk and before long Lamb finds himself floating in the sea.

“Stringbag” was the affectionate nickname for the Swordfish.  It came from the fact that it could carry such a wide variety of bombs, mines or other armament.  While being tested with this wide array of loads, some wag had commented that, “No housewife on a shopping spree could cram a wider variety of articles into her Stringbag.”  The name stuck, and from that moment the pilots always called it the Stringbag when talking about it amongst themselves.  As a premier carrier based aircraft in the pioneering  days of carrier aviation, the Swordfish deserves the accolades it receives in this riveting reminiscence by a British aviator who was  an important—and articulate- participant in this period.

“To War in a Stringbag” is a thoroughly delightful read.  I recently dusted it off to re-read this wonderful account of Lamb’s career and the story of the amazing Fairey Swordfish.

“To War in a Stringbag” is available from Amazon.com and Alibris.com, as well as some other sellers of used books.