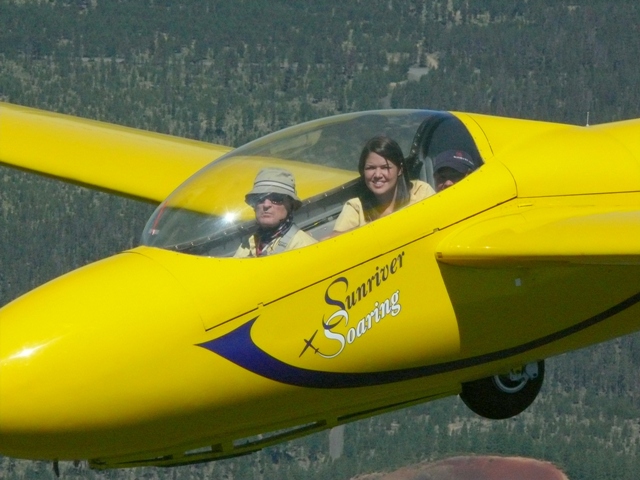 (Editor’s note:  Almost everyone agrees that glider flying experience is some of the best training ANY pilot can have.  That’s why we present this article, which is only our second from an outside writer.  Dale Masters is one of the best fliers out there.  He’s also the author of “Soaring: Beyond the Basics” (available from the Tailwheeler’s Mercantile).  I learned a lot from Dale when we flew together at Sunriver Soaring.  He was also the instructor who soloed my son, Hooper.   I’m reprinting these words from Dale and hope my readers enjoy them, whether or not they ever fly a glider.  Brian)

Warning:  the following is considered absolute heresy by most glider pilots – the good ones and the not so good, alike.  If you prefer wasting money and not having as much fun as you could, then do not read this article; it might change your way of thinking and liberate you from dependence upon artificial contrivances that have nothing to do with the joy of soaring.

One day nearly thirty years ago, during my rookie season in soaring, I noticed our regular tow pilot disconnecting the instruments of the club single seater.  When I asked him why, he smiled brightly and said that this was his rare chance to do some real soaring, and he didn’t wish to be even tempted to waste time looking inside the cockpit.

A few minutes later I watched from the ground as he thermaled up inside of a gaggle, climbing past several other ships, and became the first pilot to soar away out of sight, gone for the day.  Right then, I promised myself, “I will learn to fly like that guy.”  It has taken a lot of trying, but I wouldn’t  trade the experience for a fortune in fancy hi-tech instrumentation, or a hatful of badges won with money rather than dedication and skill.

The typical instrument panel for a modern sailplane costs several thousand dollars.  It is very sophisticated and complex, and although it cannot always be trusted, it tends to become a crutch its proud owner can scarcely do without.

I favor an alternative called the `organic variometer’.  It costs nothing, it is self-calibrating, and best of all, it’s easy and fun to use.  Unlike the many mechanical and electrical instruments available at high prices, the organic variometer utilizes information of several kinds combined in real time.  And, while audio varios[1] only allow you to keep your head out of the cockpit (which many of their owners still seem not to do), my organic model requires you to.  That itself is a terrific safety feature!

Of the several elements that make up an organic vario, any one may be more useful than the others in particular flight situations.  Therefore, the sequence in which we discuss them should not be taken as an order of importance.  (They are all important.  Th at’s the point.)

First, we have the `seat of the pants’.  Folks have been using this term since the earliest days of aviation, and it’s really as simple as it sounds:  feel for changes in pressure between the sailplane’s seat and your own.

Increasing pressure means more lift or less sink, and decreasing pressure means the opposite.  Here technophiles will protest that mere turbulence confuses the issue, but no, turbulence is itself another dimension that enhances the basic up-and-down data, its rhythm giving truly observant pilots even better means of discerning whether a momentary indication of lift is the real thing or just a patch of atmospheric junk.

We’ve all heard since our first days in soaring that when one wing rises we should turn toward it. Little is said, though, about changes in control response.  Perhaps you’ve started a turn but it doesn’t develop as quickly as you expected; this is evidence that the lift is stronger than you thought, and you should turn more aggressively.

Or if suddenly the ship is turning much easier and steeper than you expected, then the lift is stronger on the other side.  (This can be detected through aileron or rudder – or through both at once.)  Or perhaps you’ve encountered sink and begin pushing over to gain airspeed, but nothing much happens.  This means that the sink is worse than you thought, and more forward stick is necessary – NOW – not later, after your computer screen says “PUSH”.

Next, drag your eyes for a moment away from your flight director, your GPS and your whizbang whatsit, and look outside at the non-virtual landscape that surrounds you.  You can actually learn to see whether you are going up or down by comparing how things look now to how they looked a moment ago.  This works best when you’re low or flying near high terrain, and especially when gaggling with birds or other sailplanes.  High above a flat landscape it’s a bit more difficult, but is still possible.  Imagine you’re sitting on a park bench looking at the grass, and then stand up – you can see the grass drop away, and when you sit back down the grass comes closer again.  Perception such as this from several thousand feet up is very subtle, but it can be learned if you make a conscious effort.

Your eyes can do more for you than simply replace exotic avionics; they can also tell you where you are.  I was up once with a fellow soaring pilot who happens to be a world record holder and we stumbled into some surprise wave.  His immediate reaction was:  “Damn, we don’t have a GPS to mark where this lift is.”

“Well,” I answered, “if you look down, you can see we’re directly above the intersection of two major highways.”

Call me old fashioned, but it seems that if you need a GPS to tell you where you are, you are lost!  (For calculating altitude needed to begin a long glide, I make up distance tables like those in an atlas, tying together all important points in a general soaring area.  Typed out on both sides of a recipe card and laminated, one such table covers thousands of square miles, costs something less than a dollar, and is quicker and much easier to use than a GPS.)

Your ears also can provide more than one kind of valuable information, but most conspicuous is the sound of air passing by the cockpit.  For any given speed the sound is steady, but then will become louder when rising currents strike the sailplane from below.  Conversely, if you’re holding constant speed and the sound becomes quieter, you know you just flew into sink – or weaker lift.  The core of a thermal can easily be heard in this way, and you can make appropriate adjustments of attitude sooner than with the most expensive variometer on the market.  (This information may be completely unavailable if you insist on listening instead to some kind of electrical noisemaker, so it’s best to turn that annoyance off and save battery power for something important, such as communication.)

The inner ear also provides useful sensation, though it is far less obvious.  The head of any good pilot is of course continually turning and moving all around, and this distorts inner ear information.  But during those sensitive moments when you’re nosing into possible lift it might pay to hold your head quite still for a few seconds and concentrate on just exactly what you feel in those delicate organs on each side of your head.  Guarantee:  it will not work for you unless you try it.

But wait, the organic variometer offers even more!  Your sense of smell can be very useful at times, especially in spring, summer, and fall.  Let’s say it’s May, and you’re gliding down, wishing you could find some lift.  If suddenly you smell flowers, turn into the wind and follow the fragrance UP!  Or maybe it’s July and you smell cow manure:  time to climb.  (Though not so aesthetically pleasing as an aroma of spring blossoms, there are few thermal sources more reliable than a farmer spreading manure – so long as the sun is shining on that particular field at the time.)  Then in October, the scents most apt to indicate lift are those of burning leaves or grass stubble.  This brings us to the many other odors that arise from the often smelly `hand of man’.

Whether fumes from traffic, factories, dumps, or other more noxious sources, smells of any sort, detected aloft, generally indicate soarable lift.  The more they stink, the stronger your motivation to climb fast and get away.

Now, how about your sense of  …  imagination?  Yes, you can use creative thought to combine all these sensory resources, and to interpret what they tell you.  Think like a bird.  Think like an air molecule.  Think like a soaring pilot who does not need to be told by a machine what to do.  Think for yourself!  It can be very gratifying stuff.

Okay, we’ve covered touch, sight, sound, and smell – and even imagination.  So, what about taste?  Forgive me if you must, but a good way to develop your organic variometer is to cultivate a Distaste for other, more costly, less satisfying means of information gathering.

Shut those electric gizmos down and go fly for a while.

Just you and the sky.  Using natural information in this way puts you more directly `in touch’ with the air through which you are floating.  It’s fun, it’s challenging, and it will reward you with confidence in your own judgment and abilities.

The organic variometer, after all, is YOU.  Good luck, and have fun!

[1] Audio variometers emit a tone which corresponds to lift and sink.  The pilot is getting the same information he would get from a variometer without having to look at the instrument.

#65 Who Needs a Glider Rating?