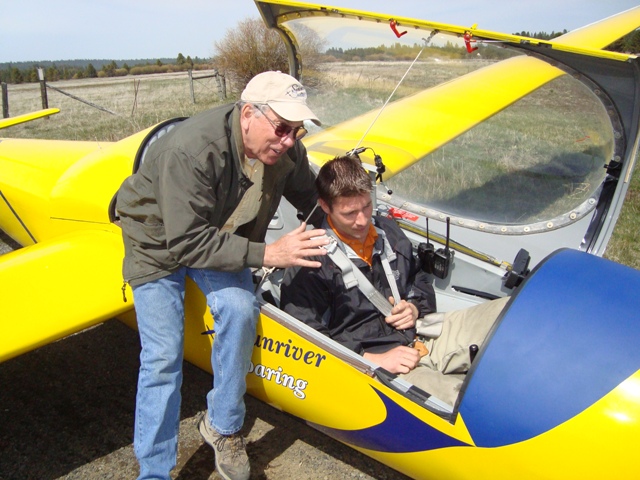 George DeMartini taught me to be a flight instructor.  There was an area where George’s CFI school was like medical school.  Doctors are taught the Hippocratic Oath.  “First, do no harm”, they are taught.

George’s student instructors were warned, “Don’t rip off the students!”

None of George’s bits of instruction stayed with me more than that one.

Students are ripped off in two ways.  The school and the instructor may calculate ways in which to increase the Hobbs time which determines how much they will be paid.

Students may also be ripped off by instructors who are not out to cheat them, but who fail to properly use their flight time in order to get the most instruction for the flight hour purchased.

I once witnessed a student and instructor perched in their 172 at the hold short line.  The instructor was yakking up a storm.  He was yakking so much, in fact, that we did four landings while they sat there with the engine (and the Hobbs meter) running.  I think that student was being ripped off.

We can also rip off ourselves, if we fail to properly utilize our flight time when we are flying to stay current and improve our skills.

Here are some of the ways in which a pilot’s practice time can be best utilized:

Pre-flight planning.  One of my favorite movie lines is from Fred Thompson’s character in “The Hunt for Red October”.  He tells Alec Baldwin’s character that, “Russians, Son, don’t take a dump without a plan…”  The same should usually hold true for our training flights.  A plan will keep us organized and best utilize our flight time.  .

Avoidance of controlled airports except when that practice is necessary.   Because of their own requirements for separation, those controllers will sometimes send you out to East Moosebreath when all you wanted to do was whip out a few landings.  Unless you need practice in this area, go someplace else.

Direct approaches, including straight ins when appropriate and avoidance of the forty-five.  It is amazing the lengths some pilots go to in order to stabilize that approach and make it easy on themselves.  That practice robs them of the practice that develops “facility”.  Flying clear out to East Jeezus in order to turn around and enter the pattern on a forty five degree angle is a huge time waster and also keeps the pilot from developing valuable skill.  The Straight-in approach will also save a bunch of time.  Obviously, certain precautions must be taken to do a straight-in safely.  Ray Charles could see that.

Touch and go landings.    A huge timesaver.  Analyze how much runway you’re giving up for the subsequent takeoff and select a spot as a “go, no-go” marker.  Touch and goes may not always be appropriate, but they sure make your practice time more productive.

Small patterns and proper flap usage.  Pattern size is pretty self-explanatory.  Pilots are divided on what constitutes proper flap usage, but in general I prefer the “all or nothing” technique.  Extending all the flaps on short final will save a ton of time over the more popular technique of “incremental flap extension” which I just can’t stand.

Practice of high speed approaches.  This is a somewhat complex issue if you haven’t studied up on it.  I’ve written about this technique which depends on your ability to judge how quickly your airplane can slow to approach speed from a high speed descending approach.

Multiple landings per approach.  More so than touch and goes, squeezing more touchdowns into each approach can really give you some valuable practice.  It is not without risk, depending on the length of the runway and the layout of the airport.  Under the proper conditions, we sometimes make five landings out of one approach.  No, that doesn’t include bounces.

Cruise descents. Use of the energy stored by altitude, a cruise descent at high speed should almost always be used to descend to the airport.  It’s normal for most good pilots, but some will bring the power way back and glide to the airport at “best L/D” which will take them gobs of time.

We all have our moments.  Sometimes I can run out of steam during a lesson and perhaps not put as much effort out as my student deserves.  Sometimes (luckily) the student needs to simply fly somewhere and not have to work on something constantly.

But my philosophy remains.  No instructor should ever give his student less than the student has bargained for.  Whether by design or not.