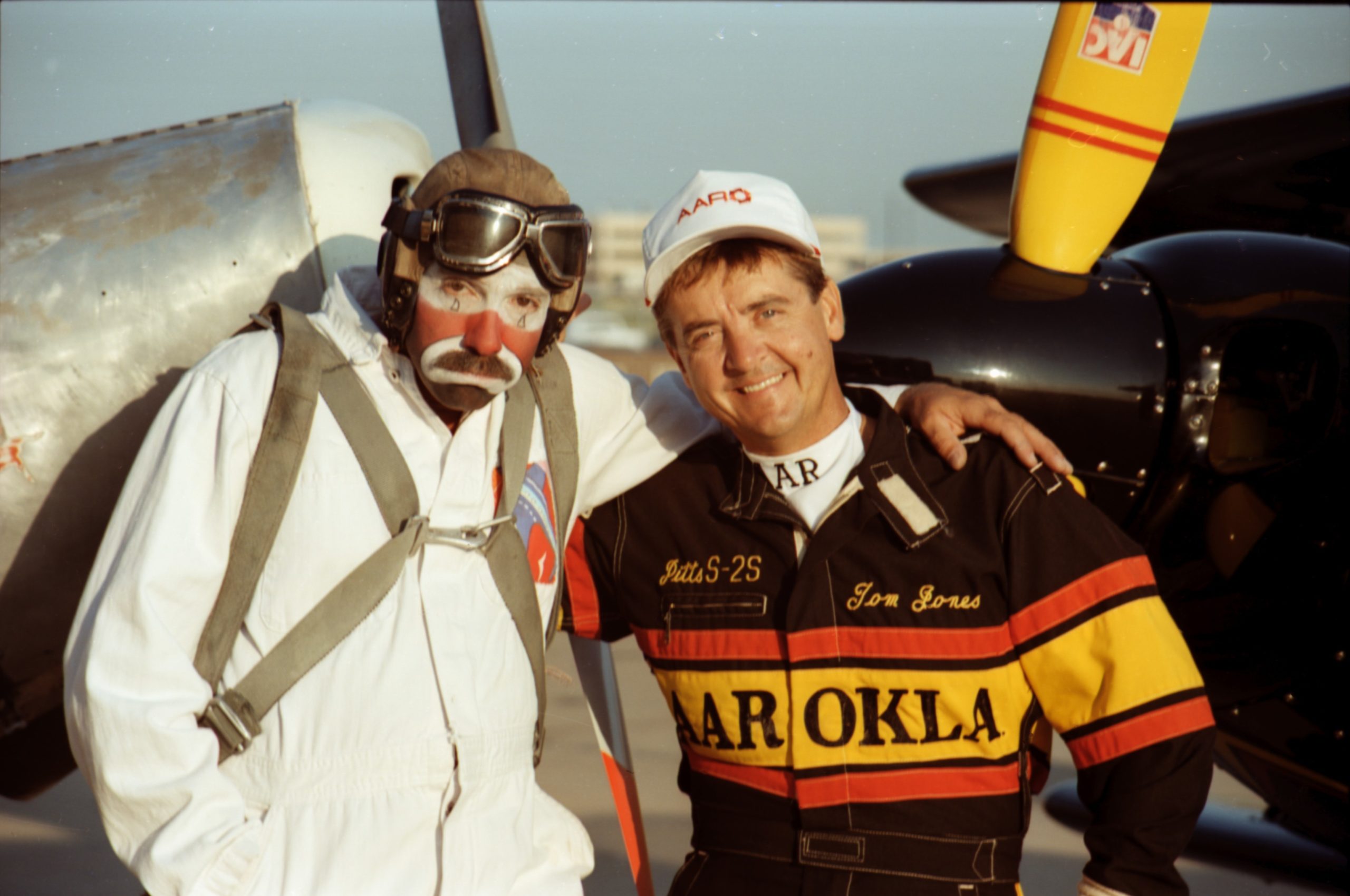 It was August of 1989.  I’d done the Reading, Pennsylvania airshow on the weekend.  That show was cancelled after the weather came way down.  I remember that Bob Hoover was there.  They sent Bob up to see what the ceiling was.  He reported that it was about 1,200 feet.  Good old Bob.  Tom Jones and I were going to do our “Champ and Chump” routine, where Tom would start his aerobatic routine in the Pitts and I, as the bumbling airshow clown, Krashbern T. Throttlebottom, would arrive un-announced and louse up his act.  In the process we’d do a bunch of wild head-on maneuvers with Tom’s Pitts narrowly missing the Cub.

I had to launch secretly from a taxiway out of sight before making my entrance.  I remember that the ceiling and visibility were miserable.  Bob’s report had been for the benefit of the feds.  We performers were on our own and we knew it.  I took off and within a few minutes I couldn’t find the airport!  What a mess I’d gotten myself into!  With only “airshow fuel” onboard, I couldn’t stay aloft for long. I had no GPS, no VOR, no nuthin’ but my straining peepers and a wet windshield.   Vainly I searched for the airport.  Finally I breathed a sigh of relief when I spotted Tom, snap-rolling in the gray distance and was able to start our act.  I think that was the only flying I did at Reading that year.  The rest of the show was cancelled and there were no more performances for the rest of the weekend as the bad weather moved in.

The weather hung in for quite a while and the ceilings were still pretty low when I launched in the Cub for points west on Monday.

The rolling Pennsylvania countryside looked all alike as I droned across it at low altitude, staying below the solid overcast.  Back then, my sophisticated navigation suite consisted of an out of date sectional chart, the airplane’s wet compass and a watch.

The key to pilotage coupled with ded reckoning is to know where you are all the time.  You carefully pay attention from the very point of departure and always identify your checkpoints.

I was lost.  All the countryside looked alike and the low hills just rolled and rolled.  Hell, years later I had trouble finding my way in that country with a modern GPS!

My foremost concern was fuel.  I wasn’t terribly low, but considering that I had no idea where I was, it was asking a lot to figure out where the nearest airport was.  Somehow, I stumbled on it.  There, just off the nose, was an airport.  I just didn’t know WHAT airport.

“Whew”.  Now I could gas up and figure out where I was.  I swooped in for a landing and tied down.  As I sauntered into the little terminal building, the pilot’s first instinct took hold of me.  You know about the pilot’s first instinct, don’t you?  It’s to be perceived as cool.  So, naturally, I couldn’t let anyone know that I was lost.  I’d have to very coolly figure out where I was without doing something obvious like asking, “duh, where am I?”

I knew the best way to accomplish this important mission of identifying my location.  I would simply find the usual big old flight planning chart on the wall with the string attached to the airport’s location.  All you gotta do is locate that chart, follow the string to its attachment and you might as well have a big old “YOU ARE HERE” sign.

There was an old airport codger perched on a worn sofa against the wall.  Across from him was the chart on the wall.  I could tell that the codger was watching me as I put my hands in my pockets, looked casually up at the ceiling and shuffled over toward the chart.  The old codger was a longtime flier and airport habitué.  How do I know that? Because as I approached the chart with forced casualness and looked distractedly at the point where the string started, he smiled   and smugly intoned, “Lost, huh”.