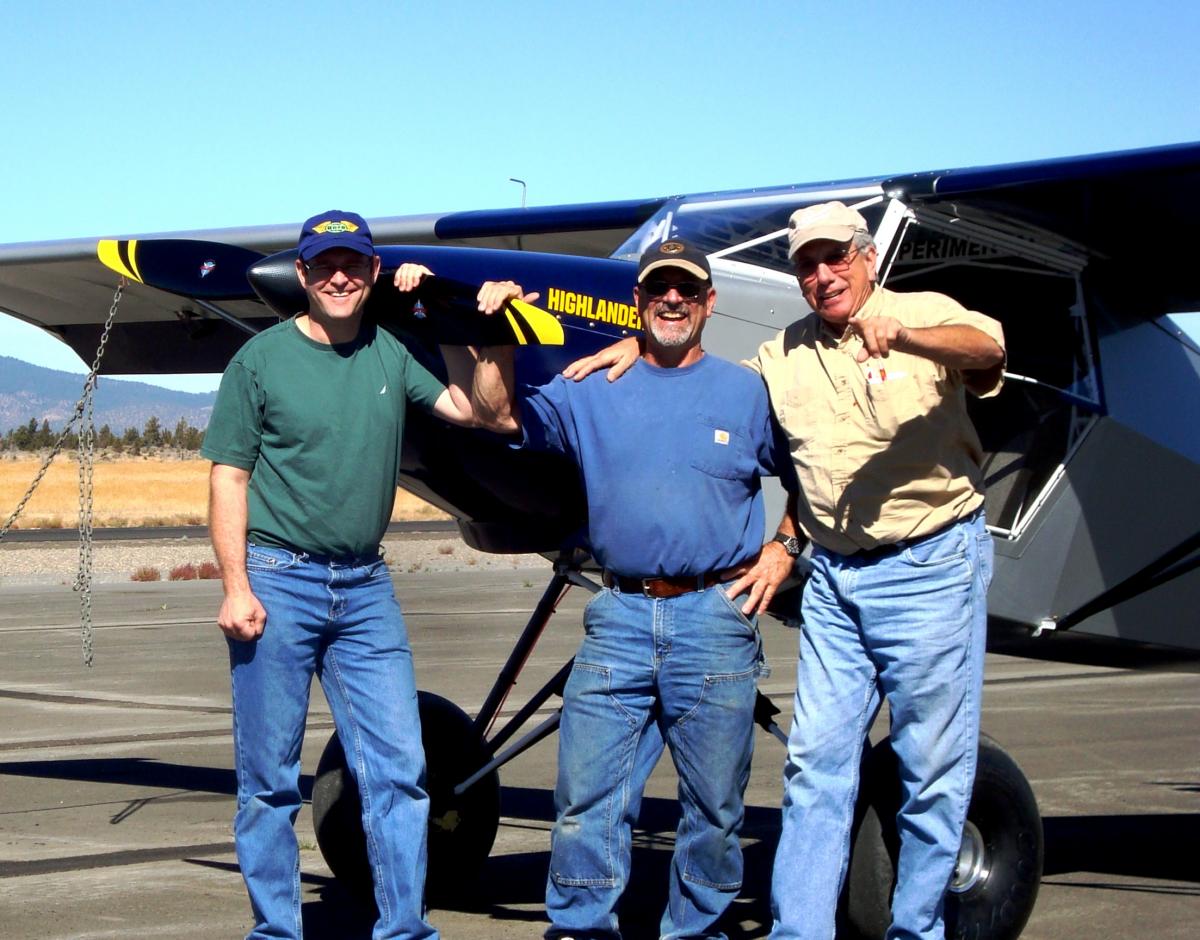 I’ve always maintained that no matter our level of experience, all of us need a little time to get used to an airplane we’ve never flown before.  First flights have to be the epitome of that experience.  I guess there are two kinds of first flights:  The first for the airplane and the first for the pilot in that make and model.  And in the second type there are those when someone checks you out and those where there’s only one seat or for some other reason you check yourself out.  Those are the interesting ones (see “Debt to an Ag Pilot” in the Journal).

Jeff Taylor and Jim Mateski are Son-in-law and Father-in-law, neither of whom were pilots when I met them.  But they decided they wanted to build an airplane and fly it.  So while they labored on their Highlander, they began taking instruction from me.  Now they are ready to make the transition from my plane to theirs.  We simply have to fly the time off before we can start giving them dual in it.My first flight in the Highlander was not the first flight for the plane.  Test Pilot Len Fox had made a couple of flights on it.  He’d done a superb job of documenting everything and listing the small group of squawks.  So my first Highlander flight would be its third flight.For those who are unfamiliar with the Highlander, I always suggest taking a look at Steve Henry’s “Dead Stick Takeoff” video.  He has a teaser on You Tube and he sells an interesting DVD on his website.  Check out http://www.youtube.com/watch?v=tHXnQCE0kG0.   You’ll see what a Highlander is capable of.

Steve epitomizes what’s possible when you select a pilot operation and simply PRACTICE.  He’s a talented flyer who loves to land his Highlander on spots that most pilots would simply fly past.

On the morning of my first Highlander flight I met the two builders at “Eldon’s Airport” (also known as the Prineville Airport) and watched them unfold the wings and roll the plane off its trailer.

The plane is equipped with an EFIS in a big panel.  Not really my cup o’ tea.  BUT I always say that a pilot has to do lots of different stuff, so whether or not I like new fangled EFIS’s, I had to gain a bit of familiarity with it.

Most of its information I would ignore on this first flight.  I needed to know how to read temps, pressures and RPM.  Other than that, it would be attitude flying.

There’s nothing like that first takeoff.  Wahoo!  Off we went.  I’ve got to say, I like this airplane.  Control harmony is pretty good.  Pitch stability is a little goofy but the trim works nicely.  With its’ Jabiru engine the plane climbed in a sprightly manner.

First I did some air work to investigate stalls, roll rate, slips and flap performance.  Then it was back to the dirt to start getting comfortable where the rubber meets the runway. With its 26” tires it was a good off-field performer.  I elected to use the dirt area alongside the runway for my first landings in order to minimize grab from the tires and make it easier to keep it straight.  I was doing for myself what I do for my students when they make their first tailwheel landings.

Careful at first, I was mostly concerned with finding how much elevator authority it had for a three-point and how hard it was to keep straight.  Then, with a growing amount of experience under my belt, I moved on to a tighter pattern and lots of different touchdowns.  I had shaken hands with the airplane and we seemed to like each other.  It was superb in slaloms and landings in a turn.  With those 26” tires the brakes had just the right amount of authority and you could jump on the binders to stop the plane in a small distance.

I made the first flight from the left seat, then moved over to my normal spot on the right.  I don’t usually see much difference between one side and the other in any airplane, but I have to admit that I’m just a little more comfortable on the right.  With stick in my right hand and throttle in my left, I’m in the same position I would be in a Super Cub, my Pawnee or the 140 when I’m giving dual in it.

I enjoyed my first flights immensely.  What I didn’t know was how much the owners enjoyed it.  Unseen by me, Jeff and Jim were whooping and hopping up and down with delight at the performance of their new machine.  And THAT is a very special experience.  Imagine the road they’ve traveled, from some boxes of parts and materials, through hours and hours of labor, to a brand spanking new flying machine.  And now they are watching that flying machine living up to all their expectations.  But  their expectations will soon turn to their own abilities. They’ve gotten a kick out of seeing their baby fly at Len’s and my hands.  But soon a new journey will begin when they take the controls.  It’s going to be a journey of an as-yet unknown length.  But I can guarantee that it’s going to be filled with adventure and the satisfaction of accomplishment.