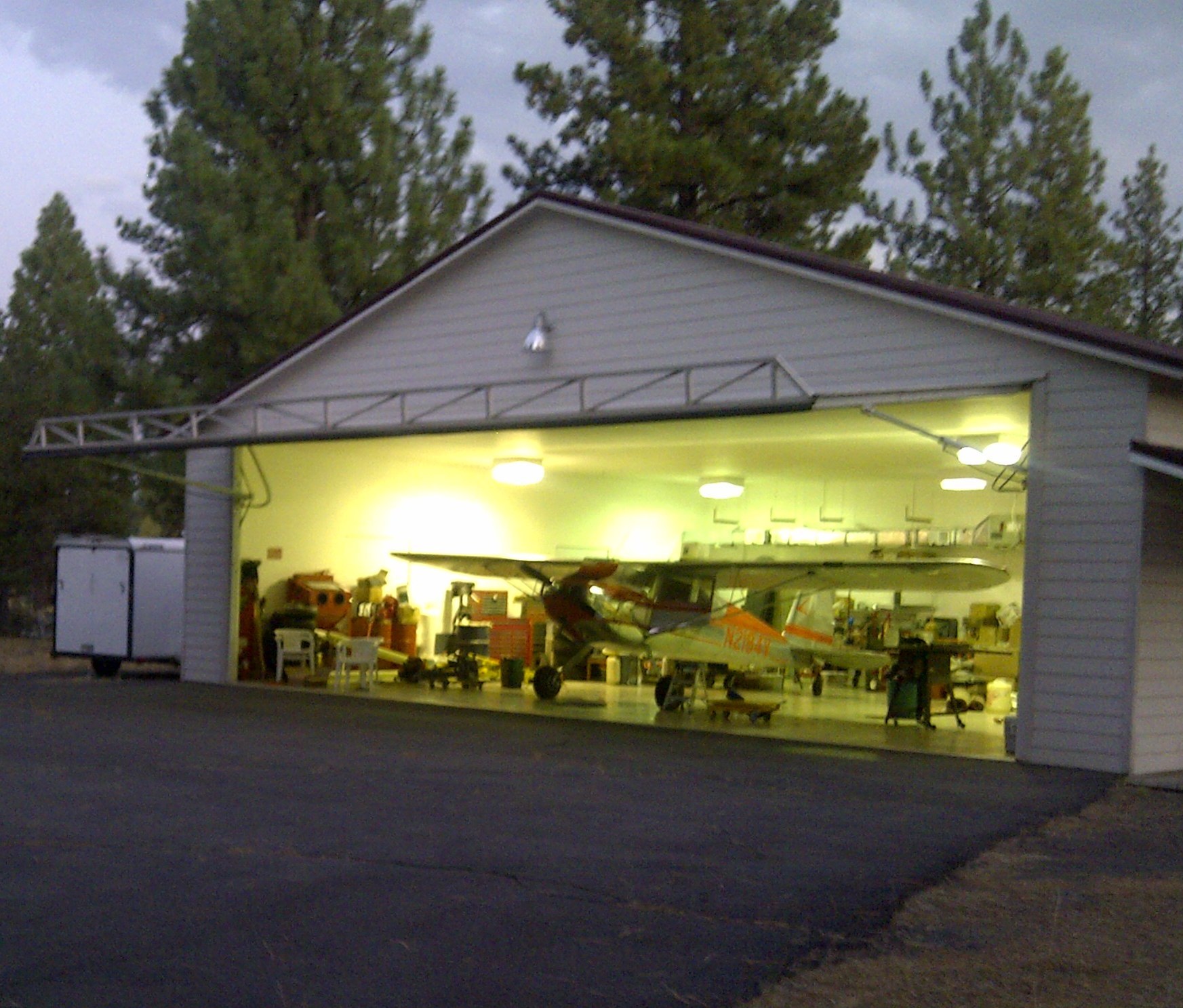 (Note to our readers:  “Hangar Doors” is one of the stories that is featured in our audio CD, “Nuts from a Blind Squirrel”.  As one of the most popular stories on that CD, we thought we’d put it on the site in its written form.  I hope you enjoy it.  Brian.)

Most hangars are used to store airplanes.  Their doors are normally closed and as you travel down a row of them you will never know what’s in there unless the door is open and someone is moving their airplane in or out.  But hangars are used for more than just shelter for airplanes.  There is an old wheeze that there are as many boats as there are airplanes in hangars.  But many hangars become more than a storage place.  They become a place where an airplane is rebuilt or created.  They become shops and thereby extensions of the people who use them.  They also beckon to those who are fascinated by airports, airplanes and pilots.

I think that a hangar door is more than just the device which seals the building from the elements.  I think that at most airports, the hangar door has become a neon sign.  When the door opens, the neon buzzes to life.  The sign beckons, saying, “hey, check this out!  There’s something interesting going on in here!”

At the very least, the open door will invite the viewer to finally see what kind of airplane lives there.  At the most, it will reveal the activity of someone creating a new flying machine or rebuilding an old one.  It will draw some people like a moth to a flame.

I don’t know why, but this has both fascinated and bothered me for years.  I have often labored in a stuffy hangar behind a closed door when I would rather have opened it.  But I knew that, depending on the airport, that open door would attract the distracters.  You see, some of us can either work or we can visit.  It’s difficult for us to do both.  So as soon as the open door beckons a curious visitor, all work stops as long as the visitor is there and we are indulging in idle conversation.  But some people can handle this distraction and actually turn it to their advantage.

Denny Parsons was one of those people.  Denny had an impeccable aviation pedigree.  An airline pilot who was the son of an ag pilot, Denny was building a Hatz biplane in his hangar at a Florida airport.  Denny left his hangar door wide open and the Geezer Patrol flocked to it.  In fact, if Denny’s hangar was open, I could be sure that I would find him working away while three or four airport bums sat around and visited, sometimes including Denny in their conversation, sometimes commenting on his project.  Denny never saw them as a distraction.  Occasionally he’d nod or grunt to remain involved, but he never stopped what he was doing.  They didn’t slow him down a bit.  And, when the inevitable chore arose that required another set of hands or perhaps a strong back, there they were, ready to help.  To this day I have always admired Denny’s ability to handle the open hangar door.

The hangar door is just part of the attraction that so many airports have.  Old guys will travel for miles just to wander into an airport.  I was never more aware of this phenomenon than when I ran the Sunriver  Airport.  That year and a half or so gave me a unique vantage point from which to observe the Geezer Patrol, Airport Bums and the whole society of airplane lovers.  One of the behaviors that used to drive me nuts was that of the old guy who would drive in, leave his car and wife in the parking lot and then wander into the little terminal building and fall right in with the local airport bums.  It took me a while to realize how many wives were left in cars out in the parking lot and when I realized how often that was the case, it annoyed me.  I guess I thought it was disrespectful.  One day a transient bum I’d never met before was chatting away with our locals and I looked out the door to see a woman sitting in a car.  “Is that your wife out there?” I asked.  He nodded that it was and continued on with some flying story.  I went out to the parking lot.  The window was down and she sat there with a magazine.

“Hi”, I greeted.  “I’m sorry that you’ve been left out here.  Would you like to come in the terminal and relax?”

“Oh, no, but thanks.  He’s in there with a bunch of flying people and, if you don’t mind me saying, it’s boring as hell!  I’m happy as a clam out here with my reading.  I don’t mind at all.  But thank you”.

I guess her reply pretty much said it all.  I had stumbled into a relationship that was well-established and acceptable to both parties.  At least in that case.

I recently traveled to the Medford Airport in Medford, Oregon.  That airport has history for me.  Many years ago, Bill Warren and I were hanging cameras on airplanes and working out of an old wooden hangar on that airport.  People would drive by all the time, attracted by that open door and the interesting activities inside.  No more.At that airport we used to see the old guys all the time.  They’d drive down our little driveway into the airport and past the hangar row.  They’d motor slowly into the parking lot and stare at the ramp.  Then they’d circle slowly and drive right out again, their little pilgrimage complete.  I saw that ceremony repeated again and again, no matter at what airport I was currently staying.  Even now, while on a sleepy little residential airpark on a dead end road, I occasionally see that slow drive-by.  And if my hangar door is open, they will sometimes drive in and stop for a visit.  This practice was described wonderfully by Tracy Thurman in his story, “One Last Flight” which we featured in the Tailwheeler’s Journal.
That hangar was scraped away several years ago.  The entire airport is now encircled with a fence.  Coded gates keep terrorists from planting bombs in all those Cubs, Champs and T-Crafts which are kept safe from them in those locked hangars.  The TSA, the FAA and all those other initialized bureaucrats have done a pretty good job of making sure that the casual terrorists can’t get in (we all know that the determined ones can still get in any time they want).  Never again will the airport kid be able to peddle down the hangar row and maybe fan the ember of his aerial ambition to a full flame.  Not at Medford anyway.  Never again will an old guy who’d fought in the sky over Europe, Viet Nam or Korea be able to wander by and strike up a conversation with like-minded codgers.  Not at Medford anyway.The little airports are all we have left.  The little airports with their hangars, some of which have open doors.Like so many of the parts that make up the aviation life, the hangar door sometimes serves to teach us a lesson.  Are we REALLY too busy to meet a stranger and visit for a bit?  Well, maybe sometimes we are.  But I always ask myself that question when deciding whether to open or close the hangar door.

Denny eventually finished his Hatz biplane.  It won “Best Plans-Built Airplane” at the EAA Fly-In at Lakeland, Florida.  Quite an honor.  A tribute to Denny… and his airport bums.