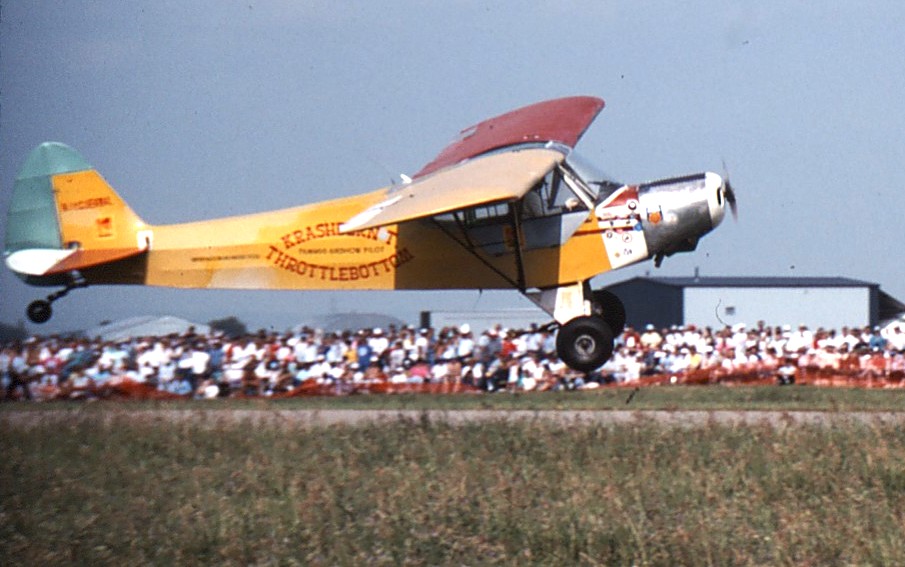 It must have been in the eighties.  Details of this trip have been lost to a great extent in my little memory banks. I don’t even remember where I was coming from or where I was going. I was in my old 100HP Cub, “The Quacker-Smacker”.  I had a quartering tailwind.  I was making a pretty good ground speed, but my crab was huge as I crossed the Texas countryside on my way from one air show to another.  Checking my chart, it seemed that Hereford, Texas would be a good fuel stop.   In fact, there are only two things I remember about Hereford.  My first memory of Hereford was the smell of the feedlot next to the airport.  It was amazingly pungent.  Considering how wind normally causes odor to get diluted, it must have been REALLY pungent on a windless day.  That day was sure not windless.  In fact, my little 100hp Cub was barely able to beat into the wind as I entered the pattern. The wind got stronger.  When I turned into the wind over the airport, my groundspeed was down to a crawl.  The single runway at Hereford was out of the question.  The wind was nearly a direct crosswind.  I called for an advisory and got the lineman, who reported the wind at over 35 knots.  I’d slurped gas like crazy to get there and my fuel gauges were pounding on “empty”.  I asked the lineman for some special help and he was very accommodating.

I circled overhead.  The downwind portion of my circle took about ninety degrees of bank to avoid being blown into the next county.  The upwind portion was virtually wings level !  I spotted a tiedown spot on the ramp and made an approach at it from a position directly downwind.  As I brought the power back and slowed down I found that I was able to hover just downwind of the parking spot.  I played with power and pitch.  Carefully, I descended.  As I got lower, I actually achieved some ground speed so I had to reduce the power a little more and pitch up to slow down.  I descended directly into the spot.  The lineman waited.  When I touched the ground and held both brake and power to stay in position, he scampered in and secured the tiedown chains to my tiedown points on either wing.  I then brought the power back and allowed the ship to settle against the tension of the tiedown chains.  The tail came down and he secured it.  Only then could I shut down.  The Cub sat on its tiedown spot, its wings rocking in the wind.  There’s a reason most of us don’t like chains:  they have no shock absorption and the Cub was pounding against the tension of the chains.

The lineman had trotted over to the gas truck and he brought it up to the Cub.  It broke the wind sufficiently that much of the pounding stopped.  I grabbed the nozzle and perched precariously on one tire and then the other as I topped both tanks while holding on against the gale. I topped the secret ferry tank as well.

After paying and peeing, the process was reversed.  I started up and he released the tail.  I powered up to release the tension on the tiedown chains and he released them.  He gave me a thumbs up and I opened the throttle.  The Cub rose up in a hover.  I turned to climb on course and assumed that huge crab angle.

By the time I got to my destination, the wind had decreased.  Otherwise, I’d remember that place as well as I remember Hereford, Texas.