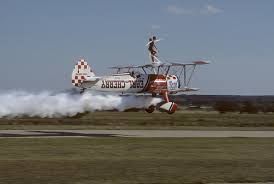 I first met Earl Cherry when I was doing an airshow back in 1986 in South Bend, Indiana.  It was actually a real landmark event for me… I also met Tom Jones.  Tom and I would be fast friends until his death a few years later.

Earl impressed me right off the get-go primarily with his wonderful sense of humor.  Now, before I go any further, it’s appropriate to deal with an issue that always arises when the subject turns to Earl Cherry:  With a sparkle in his eye, Earl often lapses into a pattern of speech that sounds very familiar to those of us who followed classic cartoons for years.  And that’s where the confusion often arises.  When I first heard this style of speaking come from Earl, I immediately thought:  “It’s FOGHORN LEGHORN!”  Yup, to me, Earl was doing a flawless impression of the irrepressible cartoon rooster.  I was wrong.  When Earl was young, he became captivated with “Amos n’ Andy”.  He was carried away with an appreciation for the writing, the characterizations and the timing, first of the radio actors and later with their counterparts on television.  And, just as Polish polka music can sound just like Mexican Mariachi music, Amos ‘n Andy’s “Kingfish” can often sound just like “Foghorn Leghorn”.  So I went on my way for years, thinking that Earl was doing Foghorn when in fact he was “the Kingfish”.

At South Bend, I was doing my comedy act.  It was called “The Acme Duck Company” and featured the adventures of my canine companion, Ace, The Wonder Dog.  Earl fell for Ace.  He thought she was great and he gained a real appreciation for Border Collies.  He would later adopt a pair of border collies and they became his lifelong pals.  Their names?  Why, “Amos ‘n Andy” of course! When I met Earl at that airshow in Indiana, he was married to Paula.  Paula rode the wing while Earl flew the big Stearman biplane he’d dubbed “General Smoke”.  Paula was a pretty woman with a slender figure.  I always kidded her about her “pointy” face.  She had fine features and I maintain that she did have a pointy face, which I claimed made her streamlined and the ideal wingwalker.  Reporters were always more interested in Paula, who rode that wing.  They were attracted by her looks and the courage it took to ride up there on that wingstand.  It seemed like they felt that the skill of the pilot who made her ride possible was secondary.  Earl adapted to their attitude very easily.  Earl understood show business and marketing.  If the reporters wanted to make Paula the star, it seemed that it was okay with Earl.  As long as they got the publicity for their sponsors.  Earl was a master at it.  He always showed up early at the show site and usually scooped all the other performers for the publicity.  His sponsors loved him for it.  He was criticized by other performers not only because he got their first to get most of the media, but also because he’d put damned near anybody on the wing in order to get the publicity.  If he could get a front page picture on the local paper by putting the Mayor on the wing and flying him over downtown, he’d do it.  He caught a lot of flak in the biz, but he got the publicity and that is half the job of an airshow performer.  I will never forget Earl’s memorable statement.  When someone, in the wake of all Paula’s fame and attention, asked Earl just what HE did in the act, Earl shrugged and replied, “I just fly da plane”.

Earl and Paula eventually divorced but remained good friends.  He kept the act, though, and added even more attractive women.  At one point he had about three gorgeous females traveling with him.  He called them “the Roll Models”.  It didn’t matter that only one of them actually rode the wing.  It seemed that Earl appreciated the fact that the more attractive women he had in his act, the more attention it got.

Earl’s flamboyant personality always made him a larger-than-life character.  That’s why I modeled one of the characters in the Screenplay for “Air Show” after him.  He was perfect for a major character in an action-filled script.

Once, we were doing an air show in Show Low, Arizona.  The promoter arranged for several of us performers to fly over to a dirt strip at the nearby Apache Indian Reservation and do a little promotion.  Earl was the first to land.  He taxied into the parking area and, with his usual disregard for any political correctness, called up to the rest of us who were inbound.  His distinctive voice crackled over the VHF:  “Hey, Krashbern, ya better circle da planes when ya land… there’s Indians down here!”

The first to arrive, Earl was also the last performer to leave that little press show.  Lots of young kids who lived on that reservation and who may have never dreamed of flying got the chance to sit in Earl’s Stearman and learn a little bit about flying from their new best pal, Earl Cherry.

Earl never got much attention for his consummate flying ability.  He probably should have.  He was a pro.  A former helicopter pilot in the Viet Nam War, he made the transition to that lovely 450 HP Stearman Biplane and flew it with panache and the smoothness that is required of a wing act.

But it wasn’t just his piloting skill that impressed me.  His faith in ME also made a big impression.  Earl had a gig with an entrepreneur who was promoting turbine-powered motorcycles.  A publicity campaign was planned that would require two 450HP Stearman Biplanes bearing the company logo to travel to air shows across Texas.  When Earl needed a pilot to fly the second Stearman, he called me.  I’ll bet he’d called some other guys first, but I’m not going to go there… I was just delighted that he called me!  I met Earl at his place in Louisiana and we launched from there in the brace of biplanes.  We took off in formation, we stayed in formation and we landed in formation at every stop. Did I mention that I had no 450 Stearman time?  Well, I think that Earl asked me if I had some Stearman time and my hero, Al Heuston, HAD let me fly his once, so I could answer truthfully that I did.  I like to think that Earl just figgered I would do okay, regardless of what was in my logbook.  It worked out.  I was a bit out of my element at first, but I learned so much so fast and I absolutely loved the experience. Not only was the flying great, but when Earl and I swooped into Las Cruces, New Mexico, he introduced me to his friend, astronaut Frank Borman.  Earl has fascinating friends.

Earl and I had some of the earliest General Aviation GPS units for that flight.  Mine was a Trimble which actually had a rudimentary moving map.  I remember flying along near the Mexican Border and telling Earl that I thought one of us had a wing in Mexico.

There is a sword hanging over the head of every airshow performer.  Occasionally the thread supporting that sword parts.  It did for Earl one day while practicing with one of the Roll Models.  The engine quit on takeoff.  The big Stearman headed for the ground.  Earl did the best he could to land the crippled bi-plane with as little damage as possible.  But the landing in the trees was catastrophic.  The wingwalker’s stand was ripped from the center section and the young woman was hurled like a ragdoll into the trees.  Earl’s shoulder harness failed and his face became one with the instrument panel.

Both pilot and wing walker recovered after extensive reconstructive surgery.  In fact, after years of pain and surgery, Earl, who was always a handsome man, is just as good-looking as ever and most who’d seen him before the wreck would not even see any sign of that devastating event.

By that time, Earl was going with Emily.  She was great.  They came to see me at Fernandina Beach once and I decided to refer to her as “The Divine Miss Em”.  They’re now married.  He now has two new Border Collies, who carry on the tradition started by “Amos ‘n Andy”.   Earl is now flying C-130’s so you might say that his career has changed in terms of the equipment he operates.  But certain things have not changed:  Earl Cherry still has that flamboyant personality that made him a great air show performer.  And, although he is a business man of some acumen, I like to think that when asked what he does, he can still truthfully answer, “I just fly da plane”.

I will always remember some of the best flying of my career when swoopin’ with Earl.