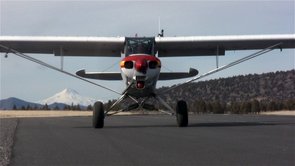 I once helped drag an Astra Jet backwards from where it had come to a rest after running off the departure end of a runway.  It rested in the mud a measly thirty feet off the end of the paved departure end of that runway.  As we attached a couple of vehicles to its landing gear and slowly dragged it back, I thought about how an overshoot like that happens.  Mostly I thought about how the last thirty feet or so of that plane’s course was actually determined by the FIRST thirty feet.  Don’t you think that the same process occurs during every takeoff?  Let’s say that you lose an engine on takeoff and slam the plane back on the runway.  You jump on the brakes and blue smoke curls up from those squealing tires as you desperately attempt to stop the plane before it runs off the departure end of the runway.  Let’s say you fail at that attempt and the plane comes to a halt mired in the mud and muck a measly thirty feet off the end of the pavement.  Now let’s go back to the beginning of that takeoff.  Could you have started the actual takeoff roll thirty feet shorter?  Most of the time you can.

I usually watch my students’ takeoff performance by observing at what point they have an open throttle.  My more apt students do a three-sixty and check the arc of sky immediately prior to takeoff.  As they begin the second 180 degrees or so of that circle, they are opening the throttle.  By the time they have reached runway heading, their tail is a mere few feet from the fence and their throttle is wide open.  They have succeeded in using every bit of runway available to them.  Not so the vast majority of pilots.  They will fuss around checking this and that while the plane is slowly using up runway.  By the time the throttle is wide open and the plane is starting its takeoff roll, they’ve left  untold feet of pavement unused behind them.    Similarly, many pilots will line the airplane up on the centerline well away from the approach end.  They will stop there in order to hold the brakes and bring up the power.  While that prop is thrashing the air, it’s picking up any loose rocks or garbage and nicking itself.  When the pilot releases the brakes, the plane must overcome inertia and begin its takeoff roll.  It’s a very accepted, but terribly inefficient method of taking off.  I’ll take the rolling three-sixty-close-to-the-fence technique every time. It also serves as the best way to begin both short and soft field takeoffs.

Now back to the scene of the ignominious coming to rest:  The guy who started his plane’s takeoff roll using that rolling three-sixty managed to stop the ship before it rolled off the pavement (or hurtled into the boulders or killed the cows or whatever).  The guy who wasted a bunch of runway with his brake-holding, runway-wasting technique has crawled out of the wreckage and is on the phone with his insurance carrier starting the claims process while the irate farmer is demanding to know who’s gonna pay for that dead cow with the propeller lodged in its noodle.  I guess I know which pilot I want to be!