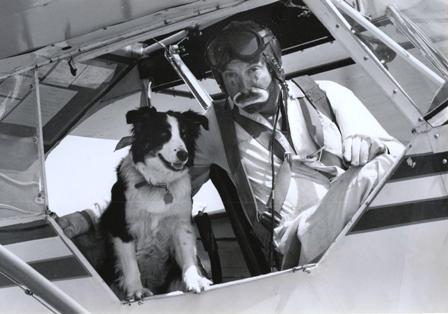 I was thinking about this the other day.  I certainly didn’t intend to be someone to whom people would go to learn things that they couldn’t seem to learn anywhere else.  In fact, I don’t think I am.  I think there are other instructors all over the world who teach the type of flying that I do.  They might not approach it the same way, but they all do what they can to encourage their students to be better than it takes to meet “minimum standards”.  I guess we’re outnumbered by all those instructors at all those “Acme Flying Schools” which use low-time, unimaginative instructors to teach by the FAA-written book and crank out bunches of pilots just like the narrator in Bach’s “Found at Pharisee”.

But in my musings, I found myself going back to figure out how I ended up doing what I do.  I guess it all started with airshow comedy flying.  I wasn’t particularly good.  I’ve always told people who asked that, although I may have been the worst aerobatic pilot in the airshow industry, I think I may have been the best dog trainer.  And my comedy act depended on a Border Collie to round up a bunch of ducks after I smacked into their big cardboard box with my 100 hp Cub.  But any airshow comedy pilot depends on a routine which includes some goofy flying, much of it with the airplane “crossed up” and flying in a very uncoordinated state.  It was that damned flat turn that started the whole thing.

A flat turn is initiated by shoving one rudder pedal to the floor and using aileron to keep the wings level.  That starts a flat turn.  Lots of power is usually required to maintain altitude in that configuration and sensitivity to elevator is kind of important to avoid a spin.  Really, it’s strictly a show-biz maneuver.  There is absolutely no reason to ever do it for any other reason than to entertain.  But once I started getting reasonably good at flying a comedy routine with that flat turn as its centerpiece, local pilots began to drift in and ask me about it.

“How do you do that flat turn?” they’d ask, although it seemed pretty obvious to me.  Pretty soon I was giving some dual instruction after the shows.  It seemed that the practice of airshow comedy flying had developed certain skills that others wanted to acquire.

A lot of time has passed since those early days of flight instruction, but I have to give credit to airshow comedy flying in general and that flat turn in particular for starting the current Stick and Rudder Master Class and the Tailwheel Endorsement courses that I spend so much time with now.

Ironically, the skid, which is the condition that flat turn is based on, is rarely practiced in the instruction I give now.  My current courses are based largely on safety and making sure that my students handle an airplane with the proficiency that’s necessary to keep them safe and in control.  A skidding stall is the basic condition leading to most inadvertent spins.  I teach my students how to recognize it and I don’t encourage its practice other than during dual instruction.

The Border Collie died years ago.  The grease paint is gone.  The helmet and goggles hang on a hook in my living room.  But I still have that flat turn in my bag o’ tricks.

And every once in a while, when I’m by myself and turning base to final, I’ll mash that rudder and level the wings.  The plane will slide sideways onto its short final and just for a moment I’ll be a comedy pilot once more.

#71 The Briar Patch and the Comfort Zone