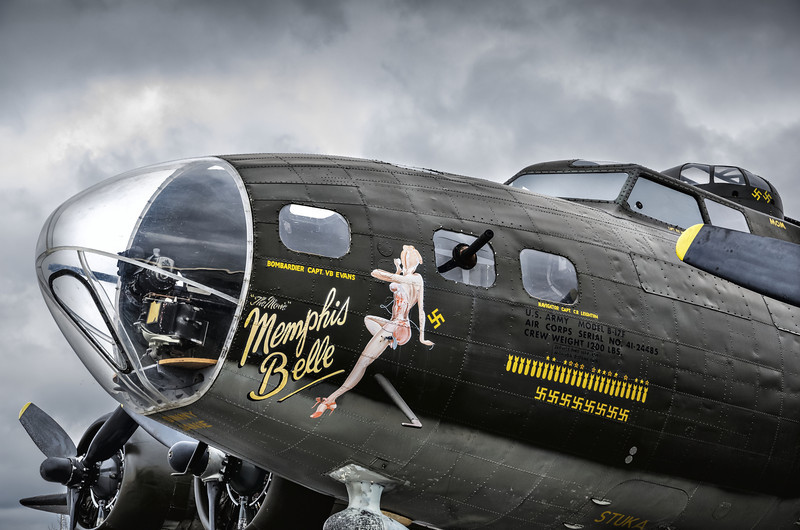 In 1990 a major motion picture was released.  “The Memphis Belle” was a blockbuster, beautifully photographed with a great script, cast and all the components that make for a successful motion picture.  Most audiences saw it for what it was.  The vaguely true story of a B17 and her crew who were brought back from the European theatre of war after surviving 25 missions.

But most people didn’t know the back story and it is fascinating.  Back in 1943, successful and talented director William Wyler did a documentary about the Memphis Belle. He shot it during the war. His picture documented the story of this bomber and crew.  It certainly could have been about any one of hundreds of bombers and their crews.  The Belle’s crew were simply representatives and perhaps that’s what made this war story significant.  I think it was in 1983 that William Wyler’s daughter, Catherine, was approached by an Oregon television producer to update her father’s motion picture with current production centered on the bomber, the woman it was named after and the story of her crew.  Writer Al Reiss and I were tentatively signed as writer and director and the two of us traveled to Memphis, where the Belle sat alone, forgotten, tattered and forlorn.  A small group of Memphis businessmen were keeping alive the idea of restoring the Belle and doing something special with her.  When Al and I arrived in Memphis, we were greeted by members of the committee who extended warm hospitality and turned out to be a wealth of information, documentation and pictures.  One evening stands out in my memory: at the home of one of the committee members we were offered a taste of genuine Tennessee moonshine.  I swirled the fluid in my glass and observed its light blue tint and the swirls of alcohol.  It looked like watered-down 100LL avgas. When I swallowed it, a warm lump of fluid gurgled down my gullet and landed in my stomach where it continued to provide a hot glow for hours.

The next day we went to Margaret Polk’s house.  Margaret had been dating Captain Robert Morgan when he took command of the B-17.  He named it “The Memphis Belle” referring to her.  Al and I had a very pleasant visit with Margaret, sipping iced tea next to her pool and listening to her reminisce about those days.  Then we were given directions and we drove out to the airport to look at the plane.

She sat on a corner of the airport.  She had been largely forgotten. There were no concessions to her reputation or the plans afoot to commemorate her.  The B-17 was by herself.  Her hatches were open.  Her tires were low or flat.  Her paint was fading and her overall look was one of dishevelment.  While Al wandered around the outside, snapping pictures, I climbed aboard.  I made my way back to the tail and peered through the Plexiglas, my point of view being the same that the tail gunner would have had, spotting German fighters as they converged on the Flying Fortresses’ most vulnerable spot.

I made my way forward and paused at the waist gun positions.  It was there that my imagination kicked in.  I remember hearing in my mind’s ear the sound of the engines laboring, the wind whipping through the fuselage, the pounding sound of the machine guns and the clinking of the shell casings raining onto the deck.  One dramatic difference that occurred to me as I wiped the dripping sweat from my face was that the Belle’s crew fought in bitterly cold conditions at high altitudes.  I now prowled through their silent craft dripping with sweat in the heat and humidity on the ground in Memphis, Tennessee.

I stepped over the hatch for the ball turret and thought of the incredible courage that must have been necessary to man that cramped and vulnerable position.

Eventually I made my way forward and slid into the left seat of the bomber.  I imagined seeing and experiencing what Capt. Morgan saw and experienced as he guided this very plane through the flak and enemy fighter fire over Europe.

I was in a ghost ship and it was an experience I will never forget.  I have since toured some other WW2 aircraft.  They were all restored and those of us who were allowed to tour them were restricted to a planned route. We were supervised by guides spouting a rehearsed spiel.  My brief visit to the Memphis Belle was special.  No guides, no restoration, just the original B-17 and one very appreciative and respectful visitor.

You can find William Wyler’s original documentary, “The Memphis Belle” at places like Amazon.com.  I can’t recommend it too much.  It is a chapter of our history that we should always remember .

Captain Robert Morgan died May 15 2004 in his longtime hometown of Asheville, North Carolina.  He was 85.

As of this writing I am still alive and swooping.