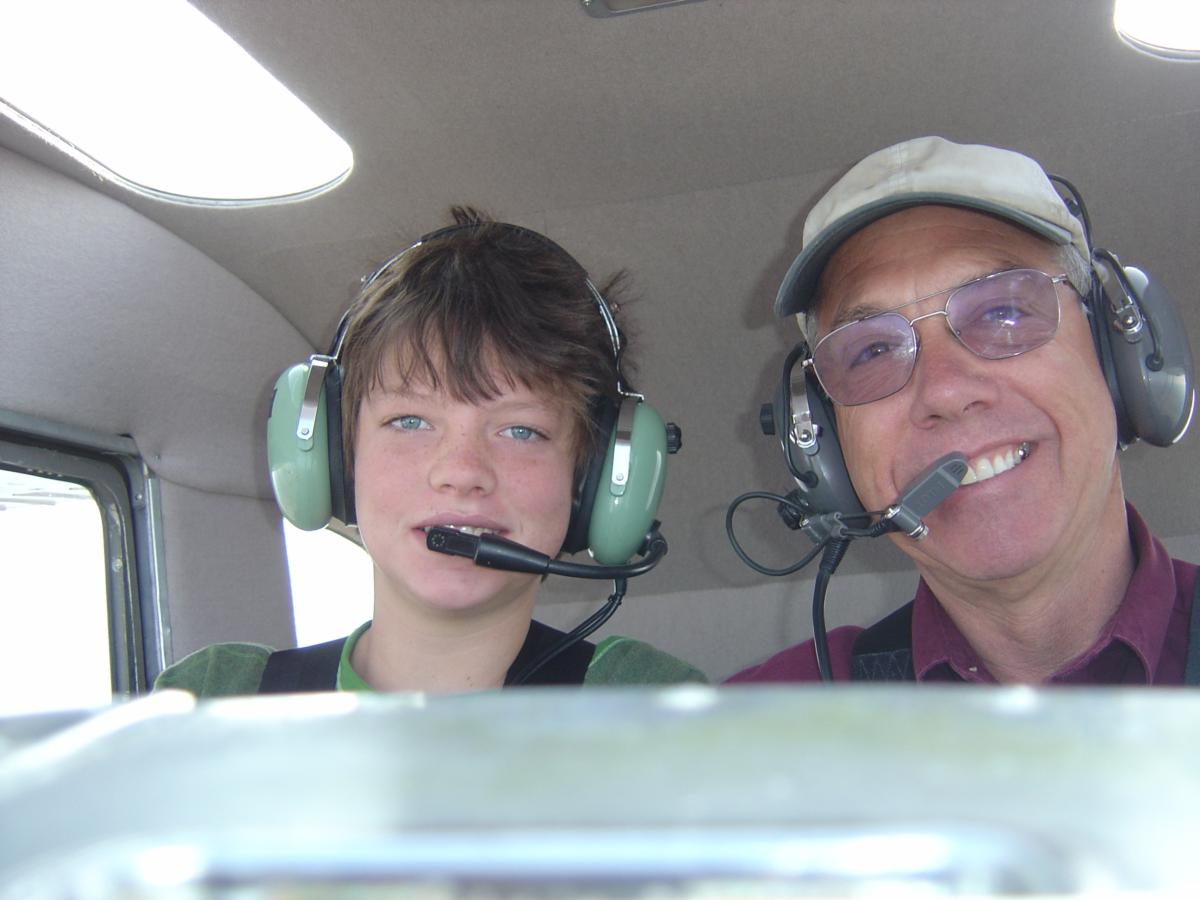 Everyone who takes my Stick and Rudder Master Class gets a chance to do the Landing in a Turn.  Virtually all my students love learning this maneuver and have a ball with it.  But every once in a while, someone questions my teaching of this advanced maneuver.

“What good is this maneuver”, they ask.

What a great question.

One day a few years ago, my son, Hooper, and I were making a quick flight in our Cessna 140 from Sunriver down to Bend, Oregon.  We were better than halfway there, when Hooper asked, “can we do zero “G”?”

“Nah,” I answered.  I was a bit tired and didn’t feel like putting myself through the maneuvering necessary to make ol’ Hoop weightless.  He was a bit persistent.

I’m a sucker for such requests from my kids.  Some would say I’m putty in their paws.  Okay, I am.  Just don’t tell them (I know what you’re thinking, but they never read my articles).

So I agreed.  I lowered the nose to get lots of airspeed.  Then I pulled up to get the nose nice and high.  Once at that exaggerated high pitch attitude, I reduced the power and began to push while watching the “G” meter and putting the needle at “zero”.  Out of the corner of my eye, I could see that rascal, Hooper, releasing his seatbelt and shoulder harness.  How else could a guy float off his seat?  Hooper floated for a bit as I flew the parabola.  Then I reached the pitch attitude at which I needed to bring the nose up.  I opened the throttle and brought the nose up.  All went as normal, other than the fact that the RPM didn’t increase.  The engine wouldn’t take power.  It would idle but no “normal climb” power.  Oops.

I couldn’t get the sunavacheesmaker to take power so I told Hooper that we needed to find a place for an emergency landing.  He coolly looked around and spotted several fields that would be suitable.  But I had something else in mind.  I knew that the little underpowered Cessna would need a suitable place to take off from and I had a hunch what it would take to fix it.  So I was looking for a different type of landing spot.

And this is the interesting part of this little story.  My son, Hooper, was doing exactly what he should have been doing:  He was looking for a spot which would result in a landing that would simply keep HIM in good shape.  I was looking for that, plus a place from which I could takeoff.  I would not suggest that anyone do what I was doing.

I found it.  Down below was an abandoned subdivision project.  A curving road served the lots on which nothing had ever been built.  There were no fences or power lines.  But the paved road curved a couple of times in an artistic manner.  I headed for it.  The landing would have to be in a turn.  I didn’t think about it at the time, but it was only because such a landing was second nature to me that the subsequent arrival was successful.  I touched down on one wheel and carved a turn as the Cessna rolled to a stop in front of a fire station.  The firemen, unused to seeing an airplane roll up to their place, asked if we needed any help.  We didn’t.  Then a police car arrived.  The policewoman asked if everything was okay.  I told her that it was just fine and that it was a perfectly normal occurrence.  Not an emergency at all and no big thing.  I told her that absolutely no media needed to show up.  Bless her heart.  She took me at my word, called the dispatcher to report that all was cool and then she drove off.  The carburetor was made to behave with a smack from a Gerber multi-tool and the little Cessna took off a few minutes later after a couple of attempts at negotiating the same turns in the road that it had handled on the landing.

It was years later that the light bulb finally illuminated over the point in my head and I began to realize how important the landing in a turn could be.  With irrigation pivots covering the world, a pilot has an almost endless number of emergency landing strips.  BUT, he must be able to land in a turn… if he attempts to cut the corner and land across one of these nice, smooth circles, he runs the risk of crossing a wheel track which may be as much as two feet deep.  Ouch!

The landing in a turn is now a regular part of the Stick and Rudder Master Class, as well as a part of most Tailwheel Endorsement courses which I teach and virtually all primary instruction. Soon we will re-do the original video production about the maneuver so that you can watch a demonstration of this landing in a hay field, courtesy of John and Debbie Volle at their lovely circular pasture with irrigation pivot.  And for all this you can thank ol’ Hooper and his fascination for zero “G”.

Happy Landings (in a turn)