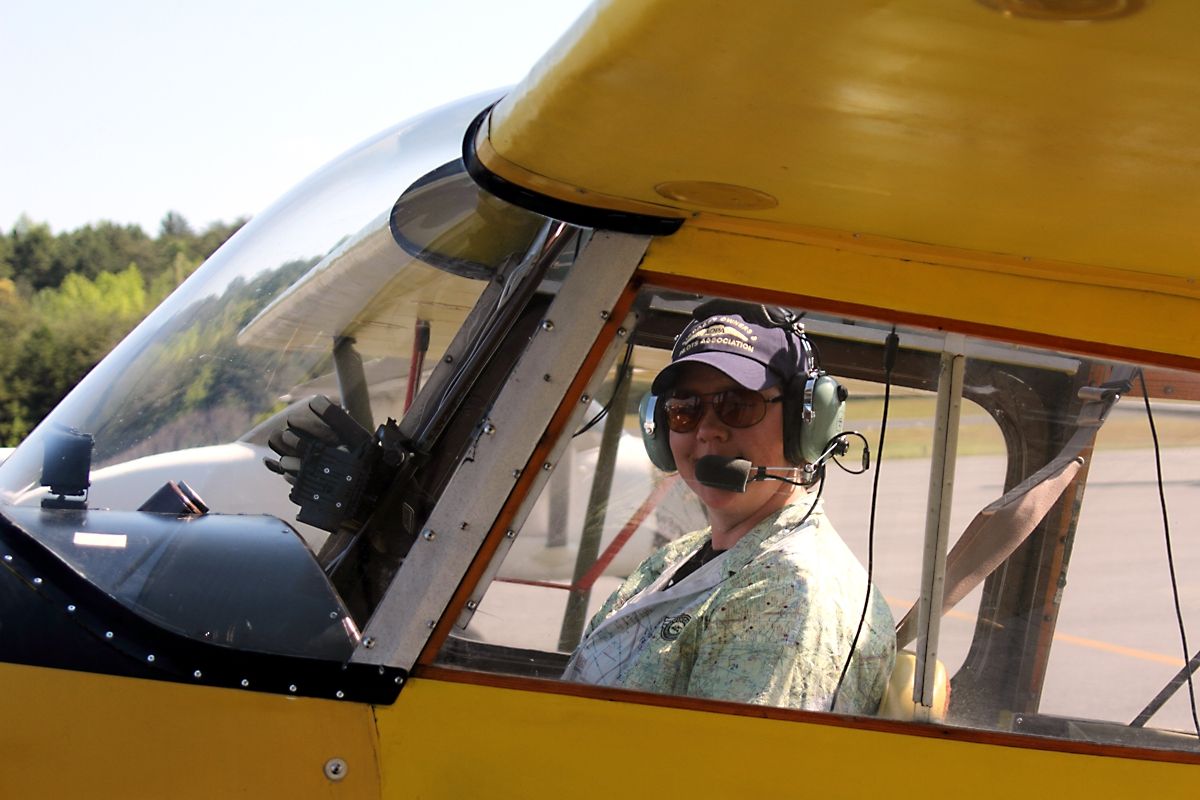 (the following is an answer to Brian’s “Too Windy to Fly?”   It’s by Gayle Crowder, a new writer who we are very happy to welcome to the Tailwheeler’s Journal.  BL)

After I became a student pilot I garnered quite a reputation at my airport. Every time I had a flying lesson the wind would pick up as soon as I pulled into the parking lot.  It might be a perfectly calm, clear day and inevitably, the windsock would stick straight out as soon as I met with my instructor. Not only would the wind start blowing, it always seemed to be a crosswind directly across the runway. My knees would knock and I’d swallow a big gulp of fear while waiting for my instructor to make the decision whether or not to fly. Most of the time he’d joke and say, “She brings the wind!” Then he’d order me to do the preflight while he ate a pretzel and visited the bathroom.

By the time I’d crawl into the cockpit of the old taildragger, I’d be calm and ready to go. Or so I say! Mostly I’d just want to throw up…and came close a few times. You see, I’d been taught to fear the wind by all the pilots I’d met and by all the stories I’d read.

Taxiing to the runway always calmed me a little. From the very first flight I learned to hold the left or right wing down depending on the direction of the crosswind, then take off and hold rudder and aileron to keep her over the runway.  I learned how to fly crooked in order to fly straight. Landings were something else! Every landing seemed to involve coming in sideways and straightening out at the last second before touchdown. I learned to land on one wheel and roll down the runway holding the other wing high until it decided to come down on its own. I learned to read wind direction from the treetops and from bodies of water. I learned how to compensate for wind speed and direction while making turns. I had a hard time visualizing the wind in relation to the compass, so I made my own tool to help me figure it out.  Flying seemed to be mostly about wind and its effects on the plane.

My nickname became “Gayle Force.” Other pilots would cringe when they saw me coming. They’d want a nice, calm flying day and if I showed up it was surely not to be. Once in a while my instructor would scratch the flight because of wind gusts or bad weather. In time he allowed me to make the call on whether or not to go up. I hated scratching a flight because of the wind. “It’s too windy to fly!” I’d hear from other pilots, but usually my instructor and I would go anyway. There was no way I was going to let a little wind keep me grounded unless my instructor felt it was just too bad to go.

I felt pretty confident in my flying ability by the time I did my first solo. That day, I arrived at the airport excited about flying.

The wind sock was limp for once and I had a feeling something was about to happen. I noticed my instructor placing a large handheld radio into the back seat of the aircraft.  I preflighted the plane, listened to the weather report, and in we climbed. I did three of the worst landings I have ever done. I was all over the place. How could this be? My instructor told me to stop the plane on the taxiway. He opened the door and climbed out.

“Give me three takeoffs and three landings to a full stop. It’s time for you to do this on your own,” he said.

I was astonished! The three landings I’d just done had filled me with shame.

“Are you crazy?” I asked. “Those landings sucked!”

“You’re ready,” he replied. “Have a safe flight.” Then he was gone, enormous handheld radio in tow.

I taxied to the runway, pushed in full throttle and took off. That plane was like a little rocket ship without him in the back seat. I managed to figure out how to set the trim properly, talk on the radio, and increase and decrease power as needed to set her back down on the runway. My first solo landing was not pretty. I saw my instructor and some others watching from the grass beside the runway and was humiliated. Any pilot with fifteen hours should be able to land a plane properly in such beautiful, calm weather.

“Go again!” said his voice in my ear. I swallowed, pushed the throttle back in, and flew around the pattern again. My second landing was a little better once I realized I didn’t have to compensate for wind that wasn’t there. I was pretty proud of my third solo landing.

You see, I’d never really flown on a nice, calm day. I had no idea how to fly in that kind of weather.  I’d been terrified of the wind since I began flight training and all along I’d been learning how to conquer it. It was a revelation.

My knees no longer knock when the windsock is sticking out. I no longer need to throw up before I climb aboard….unless that windsock is limp. When “Gayle Force” shows up at the airport and the sock is limp, all I can think is, “It’s too calm to fly!”’