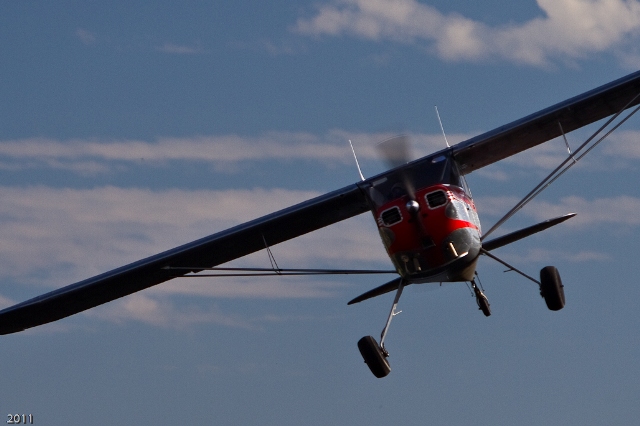 For some time now I’ve noticed a common technique that many of my students use on the descent to their destination.  Several miles out they reduce the power to well below 2,000 RPM and descend slowly to the destination airport.  I’ll be honest with you:  This technique drives me nuts (okay, more nuts than usual).  It extends the time to touchdown and just seems to me to be terribly inefficient.  I much prefer the use of the gait I call “cruise descent”.  We simply lower the nose and re-trim while gradually reducing manifold pressure in order to maintain the same RPM we had in cruise.  A little more tweaking will give you the descent rate you want and a little practice will enable you to know exactly how much throttle and how much trim will give you the RPM and descent rate you want every time.  You will arrive at your destination long before the guy who brought the power way back while still miles away.

How about the “minimum time to touchdown” approach? It could also be referred to as the High Speed Approach.  Most pilots have never heard of it (I’m used to that) but I love this proficiency maneuver.  It enables you to get on the ground in the minimum time.  Not the type of thing that’s ever taught in the modern, minimum-standards-rip-off–the-students-for-every-hour-of flight–time-we-can, flight school.  You may never need to make this approach, but I sure think it’s a great idea to know how to do it.  It consists of a high speed cruise descent followed by throttle closure, flap extension and touchdown in short order.  It’s necessary to know how long it takes your airplane to slow from a relatively high airspeed to flap extension speed when the power is reduced and also how long from flap extension to landing speed.  You can practice these operations at altitude, and then apply the knowledge to an actual approach and landing.  For example, if we are in cruise descent in the Cessna 140 with 2,300 RPM, 100 MPH and 500 fpm and we close the throttle and maintain that descent rate, the plane will slow from 100 mph in a cruise descent to 75 MPH (with flaps extended at 80 MPH) in about 20 seconds.  It could be less with a forward slip.  The object is to be crossing the airport fence as soon as that speed is reached.  It can be quite a challenge but I love it and I think it teaches planning and precise control of your airplane in a very challenging maneuver… in other words, my kind of flying!  My detractors will say, “ya can’t do that in my Bonanza!” to which I say “Bull—t”.  You can do it in any airplane; the numbers will simply change (Ask any transport pilot who flew into Saigon during the Vietnam War). Those detractors will also question the reason to practice this maneuver.  See the article on “Whuffos”.  I used this maneuver on virtually every approach and landing when towing gliders with my Pawnee.  Coupled with proper power management, shock cooling was never an issue.

Depending on the direction of your approach, this maneuver might be best combined with a landing in a turn.  All the better!

And if there ever was a swooping approach, this is it.  So,