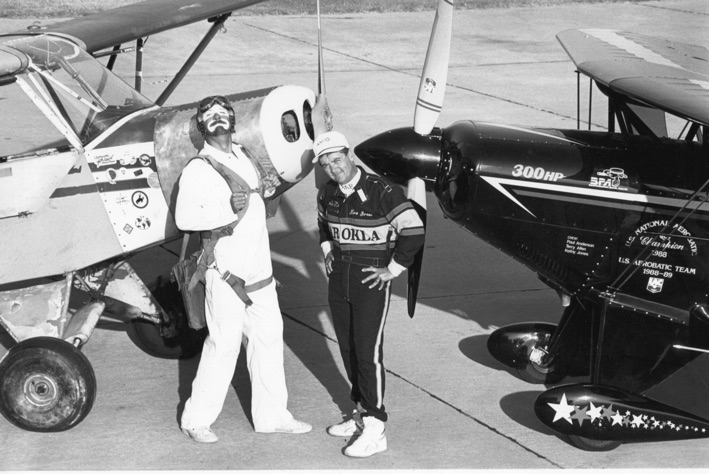 I honestly can’t remember where I saw that subtitle. Perhaps it was on Tom Jones’ flashy customized truck.  Maybe it was on his airplane.  But when I asked Tom where the phrase came from, he told me the whole story.

Seems that Tom was performing at an airshow with his Pitt’s special.  The airplane was a single place Pitts Special and I believe that, in addition to its big, muscular engine, it also had a big three-bladed Prop.  That prop must have weighed at least 70 or eighty pounds, which had to be figured at the forward end of its weight and balance calculations. As all pilots know, the center of gravity of every airplane must be within a relatively small area consisting of maximum distance forward and aft of the reference point or datum.  Any distance beyond that Center of Gravity and the aircraft can be difficult or impossible to control.

Brian (L) and Tom when they performed “The Champ and the Chump airshow act.  The Pitts is the plane that Tom used to fly.  Note the 300 hp engine and the propeller.

Tom was performing his routine and perhaps it was the snap roll that did it.  Whatever it was, the sudden force on the crank shaft caused it to break and the propeller to depart from the rest of the airplane.  With the center of gravity, sans propeller, suddenly moved aft, the airplane was virtually impossible to control.  Remember, that with the prop having left the aircraft, Tom not only had a sudden aft center of gravity, but he also had no power.  It was everything he could do, with full forward stick, to keep the airplane flying as it descended at a high descent rate toward the ground.  Perhaps Tom would have been seriously injured if the plane had ended up in a pasture or a pile of rocks but looming in its path was a cluster of aircraft hangars. Tom’s propless airplane smashed through the roof of one of the hangars, leaving a Pitt’s Special-shaped hole in the roof.  Several witnesses to the separation rushed to the scene of the crash. They probably paused for a moment, afraid of what they would find when they burst through the “man door” and into the hangar.  Such a crash could be impossible to survive.

The hangar was filled with dust.  It was hard to see because of the dust and dirt caused by the crash.  Sunlight streamed into the hangar through the hole in the roof and provided the only light. And out of the gloom of the wrecked hangar stumbled Tom, coughing and smacking at his flight suit to dust it off.  Relatively uninjured, the stunt pilot exclaimed, “Well, THAT was exciting! Does anyone know where my propeller went?

I don’t know where Tom’s prop went or what condition it was in when it was recovered, but I DO know where that subtitle came from. And if I ever needed a prop  slung, I knew who to see.

Happy Swooping (and try to keep your prop on) …

#72 In Defense of the Landing in a Turn

#88 A slight breeze in Hereford, Texas