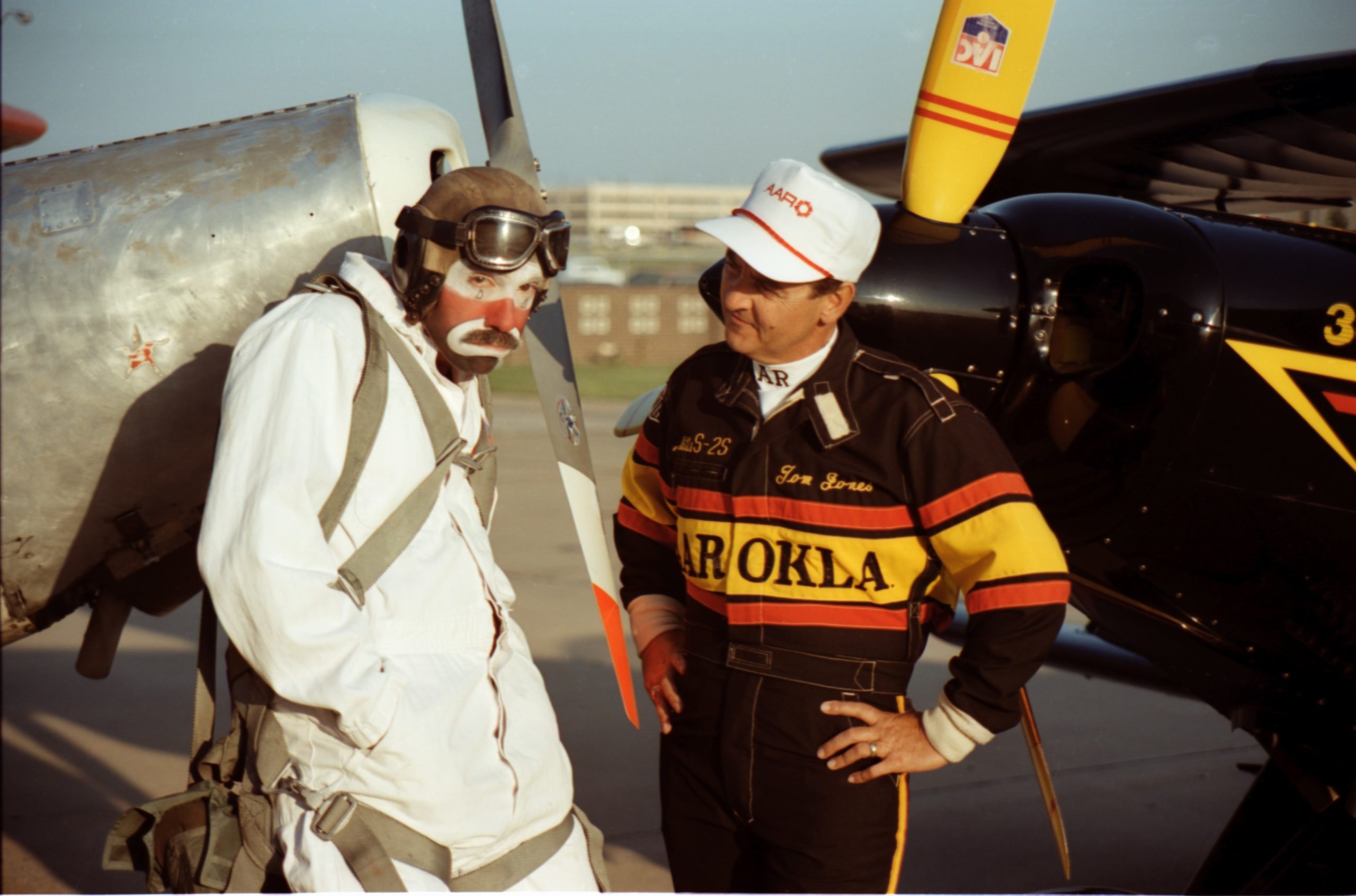 Performers often “steal” gags and bits from other performers. This is very evident in the genesis of my own airshow comedy act, The Acme Duck and Airshow Company, featuring Krashbern T. Throttlebottom and “Ace”, the Wonder Dog.  (wow, that’s a mouthful!).

But we often steal gags that are just a small part of the basic act.  One example is a line that I used for years.  No matter where I was performing, I would say over the P.A. System, “Boy, it sure is great to be here in Pueblo, Colorado!”.  The audience, who was normally nowhere near Pueblo, almost always thought that was real funny because it went along with the fact that my character, Krashbern T. Throttlebottom, was, how should we say, not the sharpest tool in the shed!

But, like many gags, it was stolen from another performer. My pal, Tom Jones was performing at some airshow somewhere and had been traveling for weeks on a

Brian as Krashbern T. Throttlebottom (left) and Tom Jones when they appeared together in an act called “The Champ and the Chump”

breakneck schedule which included Pueblo, Colorado. At the very next show, which might have been Moosebreath, Montana, he breathlessly stated to the audience, “It sure is great to be here in Pueblo, Colorado!”.

The audience roared with laughter, and Tom was embarrassed to be so confused as to his location that weekend.  When I heard about his Faux Pas, I was inspired and stole the bit for use in virtually every performance I did for years afterward.

Perhaps I should point out that I did do Pueblo Colorado once. My former wife, Nancy, and I flew the Cub from its previous appearance, over the Rockies and into Pueblo.  I was trying to get an idea of the fuel consumption, so when one tank was exhausted, and the engine quit, my first action was to enter the time in my little notebook.  I remember that Nancy got really annoyed at my nonchalance and smacked me with a chart from the rear seat as she exclaimed, “Turn the flippin’ fuel on, ya moron!”

But that is just one of so many incidents that I shall remember fondly.  It was the time when it really was “great to be in Pueblo, Colorado!”