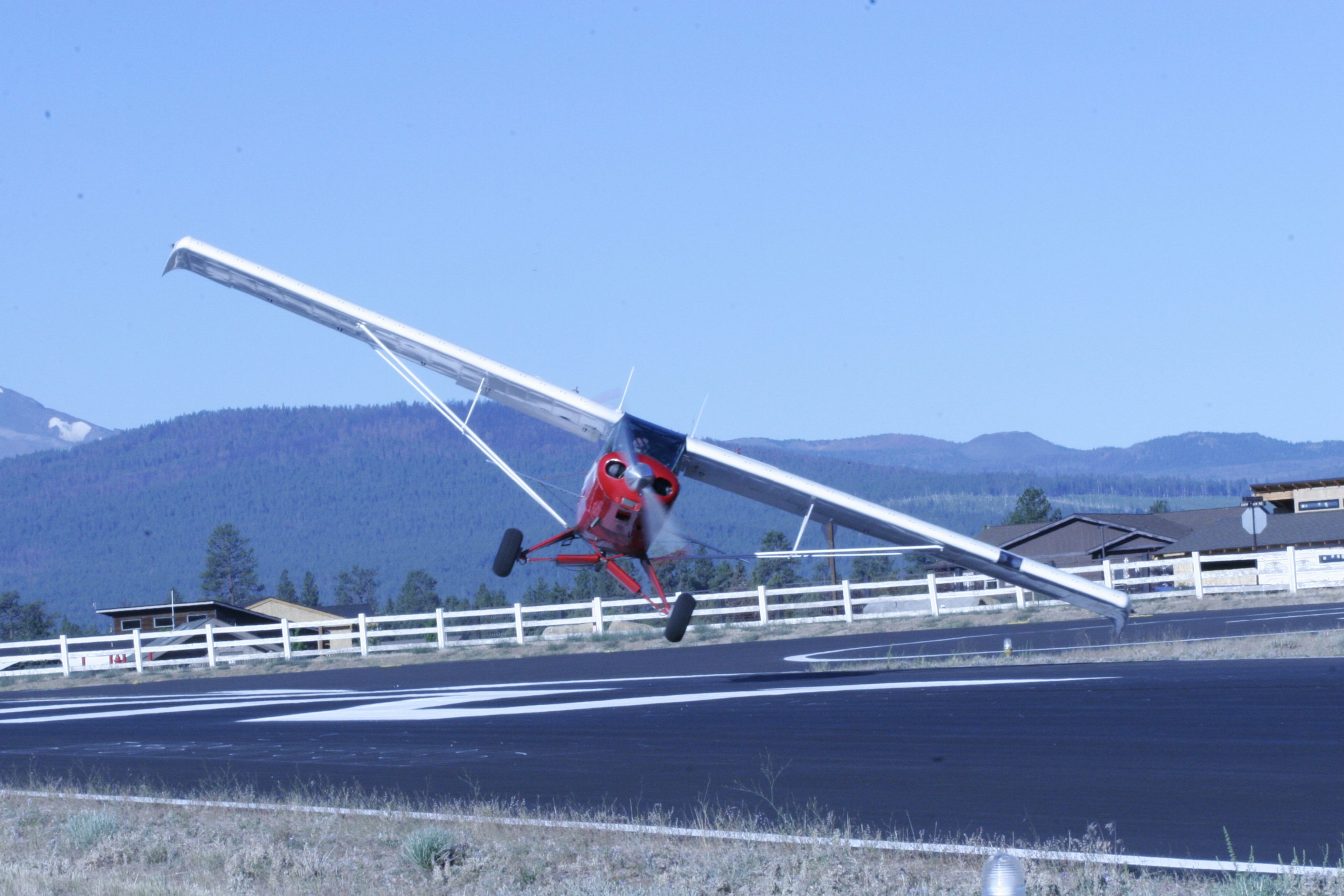 This may be the most important article I ever write, considering that it deals with the difference between “The Tailwheel Town Way” and “The Acme Way”.

At least 90 % of all flight training is done the “Acme” way.  In fact, it’s probably true that almost all flight schools are “Acme”. Occasionally, you’ll find an individual flight instructor who is not, but you’ll rarely find an entire school that is not Acme. 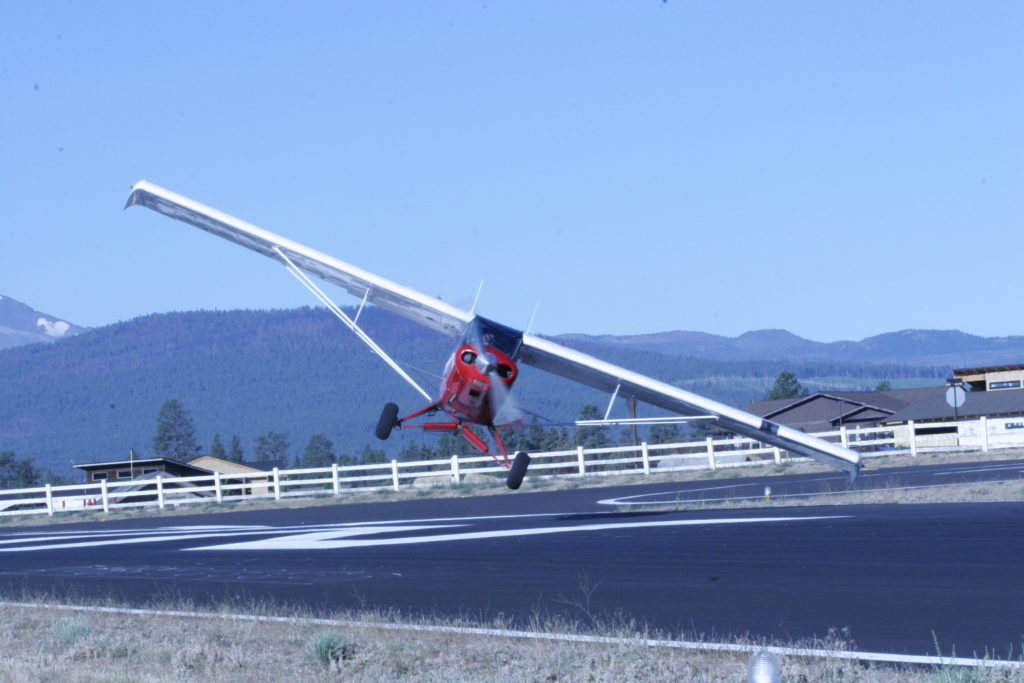 The Tailwheel Town PA12, in a decidedly “Un-Acme” landing.

I’ve long derided the “Acme” way of flight instruction.  I’ve always claimed that “Acme” flight instruction techniques are vastly inferior to Tailwheel Town methods.  It’s only fair for me to say why we differ.

You will probably not find a teacher of flying who is under fifty years old if you search for a non-Acme flight instructor.  Virtually EVERYONE is aware of this situation.  It’s kinda like the situation of the Whuffo who buys a house next to an airport and then proceeds to complain about the airplane noise.  We all know about the situation, but we continue to fuss about it.  Flight training is similar.  It’s one of the few pursuits where most teachers are far less experienced than most who make a living flying.  That’s because only Acme will hire instructors with relatively low time. It’s also the reason that so many student pilots are abandoned by their teacher.  Most flight instructors are building time while they lust after that airline job.  When it is finally in their grasp, they haul ass, leaving all their students to find another flight instructor, who is also lusting after that airline job!  Older guys who have been around, whether or not they ever flew for the airlines, will sometimes turn to flight instruction, mainly because they can’t stand to see the process being botched.  And, although women tend to be in the minority, they too tend to be older and more experienced if they are non-Acme.  Amelia Reid comes to mind, along with Edna Gardner Whyte and quite a few others.

The understanding of basic aerodynamics and energy management.  Acme tends to rely on “integrated instruction”.  That implies a dependence on instruments.  I’d just as soon throw a blanket over the whole instrument panel for those starting out.  Does Acme deal with adverse yaw and ever cover the turn coordinator?  Probably not. They never deal with “G” force and they all think that a standing start with brakes set (and lots of runway foolishly left behind them) results in a “Short Field” takeoff.  So much for an understanding of basic aerodynamics and energy management.  Here’s an interesting fact:  For years I have asked every single person who comes to me for advanced flight instruction the same question: “Did your first flight instruction tell you, that to coordinate your turn, simply ‘step on the ball’?”  About 95 percent reply that he did!

The control of the airplane when in proximity to the ground.  Acme encourages fear of proximity with mother earth.  I can’t tell you how many Acme trained pilots, when in the Tailwheel Town airplane have expressed a fear of hitting terrain that was a mile away. Our use of an irrigation pivot in order to familiarize a flyer with terrain flying is something that Acme would never do. It works, and it is fun.  Acme would never familiarize its students with that technique and would cheat them of the fun.

The pattern.  Acme uses a huge pattern and Tailwheel Town uses a tiny one. Not only does that radically increase the number of takeoffs and landings per hour that the Tailwheel Town flyer gets to do, it also increases their confidence through practice of “whipping it up”, so that it’s not necessary to make a long, drawn out approach in order to have a decent landing.  I believe that if you ever hear, “The key to a good landing is a good approach,” you should run, screaming.  Acme climbs up to pattern altitude on every approach, only to come right down again. They fly altitudes.  We fly angles.  The difference?  We only climb enough to guarantee a safe glide to a landing because the ANGLE is right, not the altitude.  Put a different way,  the angle that the airplane will glide is always the same.  So with our low downwind, we are closer to the runway.  Our angle is roughly the same as theirs, although our altitude is much lower.  And because we don’t fly a long upwind, we are always within a safe landing distance. That’s not always true of Acme.

Emergency techniques.  Did you ever hear of those things that you can’t prove, but that you just are SURE are correct?  Well, this might be one of them.  I think that Acme instills much more confidence in engines than we do at Tailwheel Town.  That’s just one reason that every Master Class Tailwheeler gets to do at least one Dead Stick landing.  Most Acme flyers don’t even know what that means!  I had one Acme flyer claim that most of their landings were Dead Stick. That flyer thought that “Dead Stick” meant closed throttle.  I had to explain that it means engine off with propeller STOPPED.

Acme rarely spins.  Acme flyers rarely receive any spin training or practice, so they remain fearful of cross controlled maneuvers and can hardly remain coordinated.  Do you know why?  It’s because their instructors are no good at it and have little experience with spins. There are some notable exceptions, but they are just that…. Exceptions!

That’s just a partial list. It hits the high points but I believe it discloses the basic differences between Acme and Tailwheel Town. Tailwheel Town tends to focus on fundamentals.  Acme tries to make its students airline pilots.  Personally, I think that’s skipping a tremendously important stage in flight training.  Acme wants to fill the heads of its students with knowledge of instrument flying, Crew Resource Management and generally how to think.  Tailwheel Town assumes that we all know how to think and that fundamentals of aviation come first, followed by all those other sides of aviation, with which Acme begins.

Having ranted against Acme for a long time, let me repeat what one of my early mentors taught me. Student pilots often need altitudes, power settings and other conditions to “hang their hat on.  Acme does that.  They give their students speeds, RPMs, flap settings, etc. to give them a structure upon which to build their skills.  That’s often necessary, but often not.  At Tailwheel Town, the answer to many questions is “It all depends”. That may be a bit vague for some flyers.

But of course, that’s just my opinion.  Since I’ve recently decided not to try to change the world of Flight Training, it’s doubtful that many will be exposed to my opinion.

#204 The Day Janet Lansburgh Jumped off the Oakwood Avenue Bridge