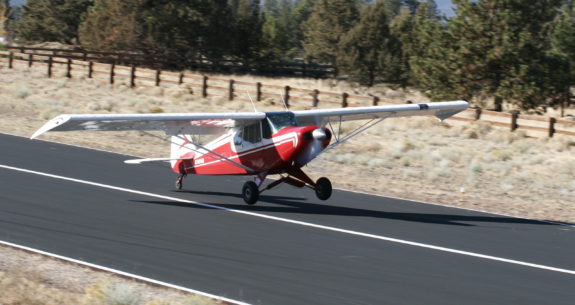 Some time ago I was wondering if the maneuvers we practice were sufficient to increase our proficiency.  I realized that they were not.  What could I do that was really difficult and which would increase my own skills?  So, I invented the Tailwheel Drag.  Let me describe it for you:

The Tailwheel Drag is a maneuver in which the elevator is held back and kept there.  I’ve found that the best way to start this maneuver is from the start, preferably on a grass or dirt runway, the better to detect the pressure between the mains and the ground.  Pitch is controlled with power alone and the tailwheel is kept on the ground.  So, the aircraft proceeds down the runway with its tailwheel on the ground and it’s mains off the ground.  But if the mains get too far off the ground, the aircraft will be at a stalling angle of attack.  The maneuver must be abandoned if a stall occurs or if the tail comes off the ground.  The first time I tried this maneuver, it was virtually impossible.  But gradually I’m getting there, although I can’t do the entire runway…. Yet.

Practicing the Tailwheel Drag in the PA12.  The mains are off the ground and the tailwheel is contacting the runway. Pitch is controlled with power while the stick is fully back. (photo by Walt Lasecki).

I’ve found that most pilots have a tendency to forget about controlling all of the aircraft’s attitudes when in a landing or takeoff configuration.  They are just so busy controlling one attitude, that they just can’t find the room in their noodle to worry about all of them.  They should.  It’s important.  I’ve noticed this tendency on the part of one of my best students when she is turning on to the dirt alongside the paved runway at our home airport.  She tends to forget about aileron and the resulting bank and simply depends on a skidding turn with rudder alone to get centered on the grass. “Tsk, tsk, tsk…”

Like the Dutch Touch, The Tailwheel Drag is incredibly difficult.  But mastery of it will create a pilot who is truly the master of the plane.  And isn’t that what we’d all like to be?