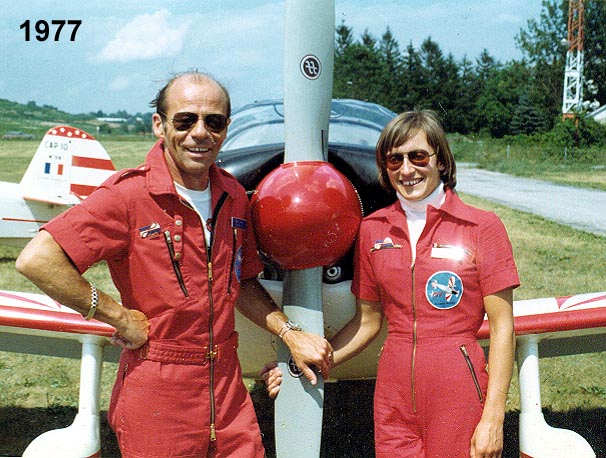 Montaine Mallet, with her husband, Daniel Heligoin were among the finest aviators to perform in front of airshow crowds.  With formation aerobatics as their specialty, some might say they were doomed by fate.  I don’t know.  I do know that, like so many of their colleagues, I was very much affected by their tragic deaths.  I immediately flashed on my own experiences with them.  I thought of Daniel’s expertise and advice when I had mechanical issues with my Cub in Oklahoma City.  I thought of their warm hospitality when Earl Cherry and I were flying together at the Daytona 500 and enjoyed a wonderful dinner at their home near the Flagler Airport.

With all the preparatory work that my comedy act required, I found that I ignored many acts when they were up flying before my cue.  But not “the Frenchies”.   I almost always stopped what I was doing, particularly when they performed their canopy-to-canopy aerobatics, which required 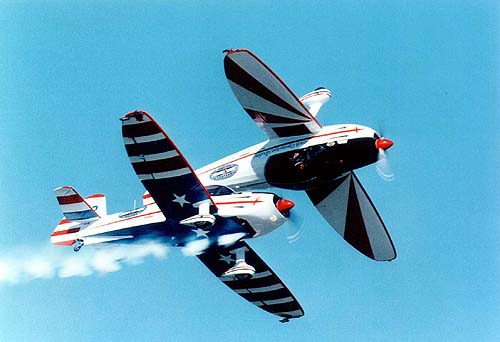 Daniel and Montaine as “The French Connection”

so much skill and precision.  I also enjoyed their soundtrack, consisting of music mixed with Montaine’s own narration.

But the memory on which I looked back the most fondly was also the one which caused me more of a grin than any other.  It was brought about by one of the worst mistakes I ever made as an airshow pilot and also about how that mistake triggered the love for animals that Montaine carried in her heart.  Montaine and I shared something that day at the Sussex, New Jersey airshow.  We were both wrong.

I was doing my airshow comedy act.  At the end of the act, my character, Krashbern T. Throttlebottom, has crashed his airplane into the giant box of ducks, scattering the quackers over the ramp.  His faithful sidekick, “Ace, the Wonder Dog”, has rounded the ducks up and herded them into a little cage produced by the Duck Delivery Lady.  Then Krashbern

admits to the Duck Lady that he has no money with which to pay for the birds, but offers to give her a ride in his airplane “in lieu of payment”.  She accepts, the Duck Lady, Krashbern and Ace all hop in the plane and take off to close the act.  But this day I made a critical mistake.  I failed to note the position of the little “catch-cage” full of ducks.  I opened the throttle to roar off and “SMACK”, I crashed right into the cage, which was in front of my blind taildragger Cub.  It was a sickening sound and feeling.  The cage was pretty much destroyed.  The seven ducks were scattered and a couple of them were lying, unmoving, on the ramp.

The show must go on, so I leapt out of the plane, grabbed the ducks one at a time and quickly tossed them into the Cub.  The two who were unconscious were put in the Duck Lady’s lap.  Then I fired up the plane once more and, instead of flying off into the sunset, taxied rather ignominiously down to my pit area where my truck with a big duck cage awaited.

Once at the pit area, we examined the ducks.  All were okay.  Of the two who were unconscious, one perked right up and seemed to have no visible injuries.  The other had a little cut on the top of his head.  We put a band-aid on it and he joined his colleagues in the pen, dipping into their generous  water tank and recuperating from the shock of their collision with the plane.  The plane, by the way, had been dubbed “The Quacker Smacker” by a colleague and the name was certainly fitting this day.

But I owed the large audience at Sussex a true dénouement, so I headed on my little GoPed scooter to the announcers’ stand.  Sonny Everett, the show’s announcer, introduced me to the crowd and I quickly explained that the climax of the act had gone wrong and a collision with the catch cage was NOT supposed to happen.  But, I explained, all the ducks were fine.  I apologized for the mishap, thanked everyone for their concern and hopped off the stand, thinking I was done.

But I’d failed to realize that there was a duck-lover in the house.  Montaine Mallet, wasted no time getting in my face.

“You killed zat duck, didn’t you, Brian,” she accused in that wonderful, thick French accent.

Montaine went with me down to the pit area, where I showed her all seven ducks in fine fettle, one with the little bandaid on his head.  But Montaine wasn’t having it.

“You can’t fool me,” she said, shaking her head, “You had a spare duck!  What did you do with zat dead duck?  I’ll bet you’re having duck l’orange for dinner tonight, you fiend!”

As much as I explained to Montaine, she never did accept my account of the events.  Within a few years, in May of 2000, she and Daniel had their tragic midair while rehearsing their act.  The talented aeronautical engineer-turned airshow pilot was gone.  And, while I’m quite sure that she had other things on her mind when that tragedy occurred, I’m also sure that she went to her death, firmly believing that I had killed that duck.

I miss Montaine and Daniel.  I think they brought a wonderful quality of airmanship, poetry and showmanship to the airshow stage.  And they also demonstrated to me a genuine concern for the well-being of all airshow performers, including the feathered ones.