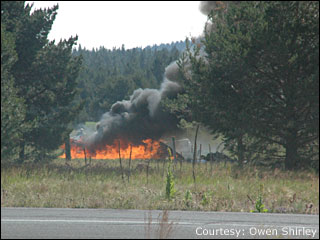 I certainly didn’t expect to have an epiphany that morning.  I was doing a pre-flight on the Outlaw Aviation 172.  Come to think of it, that’s the way these things happen.  It’s not like you say “I think I’ll go to the airport and watch someone kill himself.”  Nope, it happens suddenly and with no warning.  It had been that way a few years back when I was on the phone with a

potential glider rider at Sunriver Soaring.  Suddenly I heard a loud “Bang”.  I rushed to the doorway of my office just in time to see a Cessna Conquest which had hit the runway so hard that he’d struck the right prop and blown up the turbine engine on the right side.  That was the “bang” I’d heard.  The pilot then decided to execute a go-around.   It was an impossible feat.  With his speed well below “blue line” he cobbed the power to it but only the left engine could respond.  The airplane left the ground, executed a lovely slow roll to the right and smacked into the ground beside the runway.  It left a burning, smoking hole in the ground, killing the hapless pilot .  Glider rider Owen Shirley was waiting to board our Big Yellow Glider at the end of the runway and took the attached pictures of the crash. 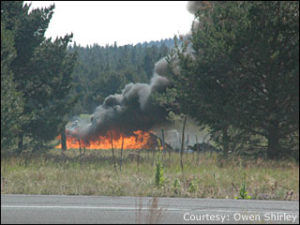 An improperly executed go-around had claimed another victim.  Perhaps we who noodle about these things have been harboring some misconceptions about this overly-taught, often misunderstood maneuver.  And perhaps it took this long for me to properly organize my thinking and figure out how to express myself about it.

To prevent unfortunate results of a poorly executed go-around, I think we’ve first got to understand the probable REASONS for that Go-Around:

Dawgfahrt in front of us (credit belongs to my brother for coming up with this name).   John Creason supplied me with an excellent example of this particular cause for a Go-Around.  I won’t get into all the details, but lots of times there’ll be a guy in the pattern in front of you.  It’ll seem like there is plenty of time for him to either land and exit or do a touch and go.  But for reasons best known to him alone, he’ll lollygag around and cause that formerly comfortable distance to get smaller and smaller.  That leaves the pilot (you) with a decision:  Are you going to continue and assume that there will continue to be enough room?  Are you going to go around?  Are you going to hold off on making that decision?  This one’s complicated!  Often, to go around will screw up everyone in a crowded pattern and put the pilot of the go-around aircraft in another pickle as he tries to maneuver back into the pattern.  Hey, I didn’t say I had the ANSWER, only that I would enumerate the problems!

Our own screwup.  Just like the poor guy in the Conquest, this just could be the most common one.  It’s certainly the one I’ve seen the most of.  We’ve simply arrived over the fence too high, too hot or some combination of the two.  The most common way to exacerbate this screw up is to continue and actually land before realizing that you now have no room to stop!  This is more of a problem in a tricycle gear airplane than it is in a taildragger.  Why? ‘Cause a trike MUST be fully stalled when landing.  You simply can’t hurry up the flare and landing.  A tailwheel airplane’s pilot can “pull a Wolfgang” and wheel it on, then hop on the brakes, keeping the weight of the aircraft on the wheels and thus making the brakes more effective.  But the trike driver who instinctively tries that same technique (as they all seem to) will end up “wheel-barrowing” the plane, with weight on that poor nose wheel and wings, with very little weight on the mains.  As he tromps on the brakes, the usual result is smoke from the tires as the plane continues toward its date with the overrun and the airport fence.  That’s when the go-around is often initiated.  It’s too late.

That’s what I recently witnessed on that morning when I was pre-flighting on the ramp.  The guy was fortunate that he had enough power to pull it off.  He got off, made a left turn to avoid the ridge ahead and was able to come back and land normally the other way. It was really the reason I was prompted to write this article.  One of my own students was once guilty of this one (you know who you are).  I used to think that the departure stall was the biggest villain in go-around accidents.  I’ve changed my mind.  I think it’s more likely the delayed decision.   The answer to this one is that a pilot must evaluate his accuracy or other considerations well before reaching the airport fence.  Then he’s in a position to make a very comfortable go-around and come back for another try with a better approach.  Interestingly, those who customarily do the “stabilized approach”, which I spend a lot of time criticizing, will rarely make this mistake.  They may not be capable of making a short approach, but they’ll have hit all their parameters and a decent landing will be assured… as long as the local deer don’t show up at the last minute.

Sudden obstacle.  Here at the Sisters Airport, where Tailwheel Town is located, we have a deer problem.  As many of us have learned, we all have a tendency to focus on the runway in front of us.  We may not see that pesky ungulate herd, which seems to have a compulsion to graze on the centerline.  If we see them in time, we’ll often make a low pass to scare them off.  That works, but you’d better be prepared to make a “Tailwheel-Town- tiny- pattern- and –short- approach” in order to come back and land before they turn right around and come back.  Where I used to teach in St Mary’s, Georgia, Gopher tortoises were a common problem.  They weren’t’ big enough to see when you were a half mile out, but they were sure a good reason to either lift a wheel or execute a go-around.

These are just some of the reasons for the Go-Around, as well as some of the ways it can cause disaster.  I’m sure there are others.  I have often described the go-around as “over-taught”.  I may have been mistaken.  Perhaps we simply need to look at it from a different angle and change “over-taught” to “improperly taught”.  Our objectives at Tailwheel Town have always been to Teach and to Protect.  There are few maneuvers that combine those two purposes so well as the proper method of teaching the Go-Around.

And, like so many other flying operations, the go-around is a lot more complicated than it first appears.  When we begin to examine all the reasons for it and the ways it can be accomplished, we begin to understand why, when my pal, Jerry, is asked his opinion about it, he will often reply, “it all depends”.